I enjoyed Boak and Bailey’s book a lot, read it quickly, devoured it even; it lasted me a couple of days, ate into valuable working time, and I was annoyed when I spilt some amatriciana sauce on it. I smiled at some of the portraits of the interviewees I have got to know since writing about beer from the late 1990s: the prickly one, the comical one and the regal (or really unregal) one. There are many moments in the book that chime. I recalled the Salisbury in Cambridge, which was an early CAMRA Investments pub that I used to visit a lot, for the scrumpy and ‘foreign’ lagers. I remembered the jolt that Man Walked Into A Pub caused amongst beer writers when it appeared and I even remembered when the Society of Promotion of Beer from the Wood (I always wanted to say prevention instead of promotion) had a stand at the Great British Beer Festival and looked forlorn; I thought about joining them for some unknown reason (who knows why one joins things: I briefly joined Amnesty to try and impress an ex-girlfriend).

Brew Britannia is a fascinating odyssey through the last half-century of British beer and I would recommend this without a moment’s thought. But (and I bet you could guess this was coming), with my book reviewer’s hat on, I can only say I feel slightly disappointed with parts of it. I was expecting more of a dynamic narrative that would reflect what has happened in beer. There are moments of great dryness, a kind of ‘then this happened and then this other thing happened’, but I wanted more.

Perhaps it’s the fact that the chapters from the middle of the last decade onwards (the emergence of Thornbridge, BrewDog, Magic Rock, craft beer etc) feel like they belong in a magazine article rather than a book (however, the stuff on the emergence of CAMRA and the 60s drinking scene is excellent and I wonder if this is where the authors’ hearts lie). They’re entertaining but feel flimsy, they feel like a broad brush and seem to rely on the way blogs reported things — personally I would have interviewed more of the characters, even if it was only on the phone. I would have certainly liked an interview with James Watt and/or Martin Dickie; the authors don’t seem to have been done that (please correct me if I am wrong) and as BrewDog are perhaps one of the most important British breweries to emerge in the last 20 years (along with Thornbridge) I would have liked more on what drives these two.


Still, I did enjoy the book and wish it every success but I can’t help feeling that my glass is only 2/3rds of a pint full.

Posted by Adrian Tierney-Jones at 08:30 No comments: Links to this post 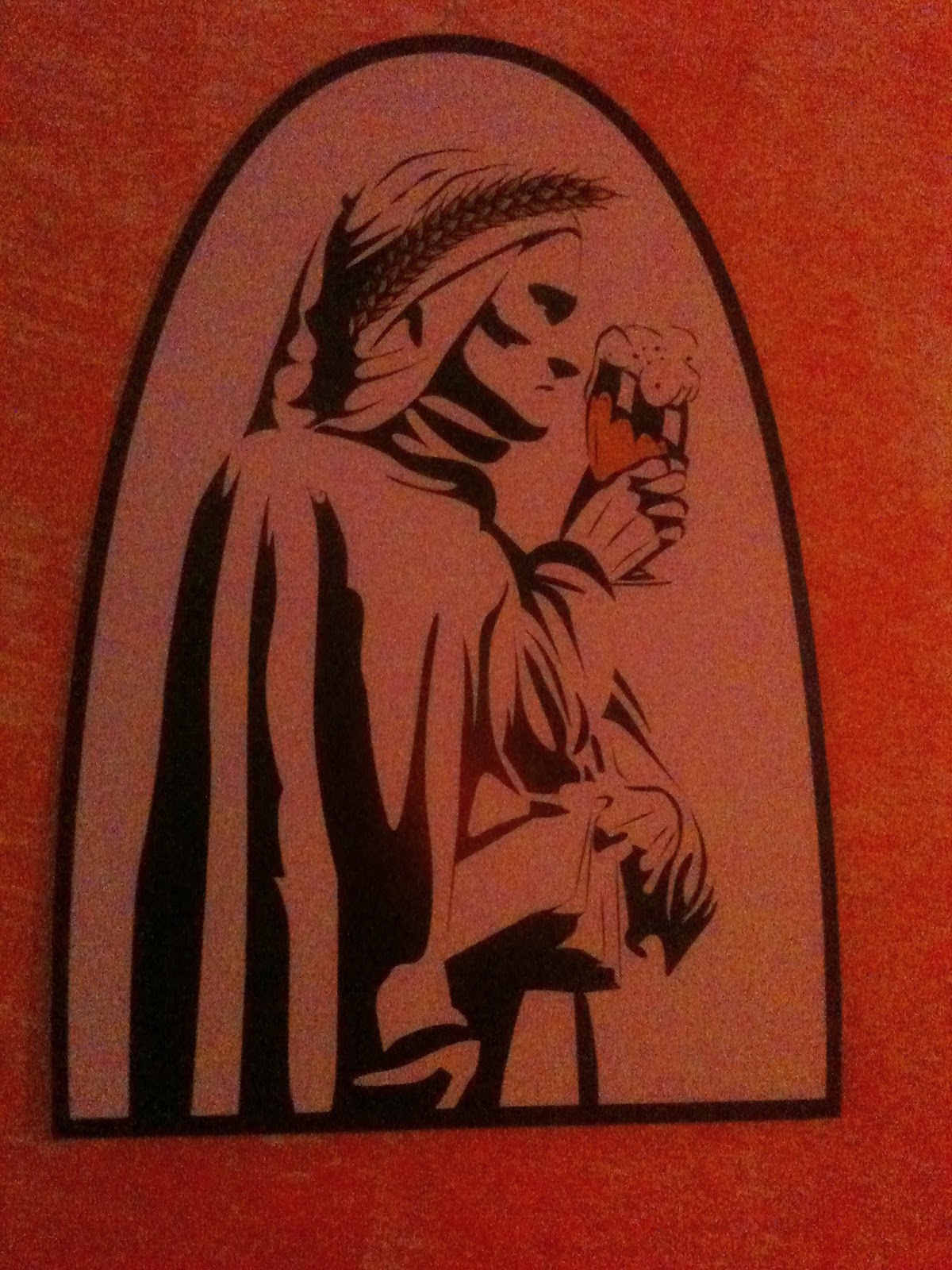 What is the attraction of wine? Is it the acidity, the tannin-like firmness that keeps the palate in check, the colour, the collaboration it undertakes with food, its lack of sweetness, and maybe its antiquity? We in the North like to drink something associated with antiquity, we like to feel part of the Mediterranean civilisation from whence wine came, while those in the south of Europe might like to feel part of the North by drinking beer (or maybe they just like to wind up the older generation) — the perceived hardiness and warrior status of the North.

Then I ask — what is the attraction of beer? The length of its assignation in the glass, the join of sweetness, bitterness, dryness, fruitiness and — sometimes — sourness, the collaboration it undertakes with food, the patchwork palettes of colour. Oh and yes its antiquity. We in the North like to drink something associated with antiquity, we like to feel part of the North by drinking beer — the perceived hardiness and warrior status of the North. We also like to feel part of our history and heritage (a word I don’t really like using, it’s too National Trust for me) by drinking beer.

And then I think of the beers I have drunk in Florence, Rome, Venice, Malaga and even Lisbon in the last few months; beers from the wine countries, beers that are artisanal, produced on a small scale, looking northwards for inspiration and motivation. And then I think: what is the attraction of beer? What is the attraction of wine?
Posted by Adrian Tierney-Jones at 16:57 1 comment: Links to this post

Nothing much seems to change within the discourse of beer as this fragment of a letter from an WA Thomson (who could be a brewer) to the Brewers’ Journal demonstrates. The date? October 15, 1921.

‘The more one ponders the subject the more one is forced to conclude that public taste in beer is largely a matter of custom and usage. It is a subtle question if we really do like the very new beers we are supposed to demand today. The pendulum has swung from the old time beers that, being brewed in an unscientific age, were often cloudy and sour rather than healthily matured, right to the other extreme of raw newness, And the scientific effort of the up-to-date age is directed to getting these new beers clean and brilliant on the cheapest cost of production. So that in both ages, at both ends of the swing of the see-saw, there appears no very great wholesomeness of production, In the former case good and plentiful materials were unscientifically used; in the latter a difficulty is present that taxes even modern science — the warding off of disease in weak solutions of fermentable matter.

There is, or there ought to be, a hygienic strong beer of fair gravity, of the nature of a liqueur beer, for the English public house trade. Beyond doubt such should be there when it is asked for. The price is of importance, but not of such importance as in the case of common qualities. Such a beer is guarded against disease by its own body and strength assisted by modern science. We have nothing further to say of this quality. But there remains the common Public Taste to be dealt with further.

Do people really care for the heavily-hopped bitter beers of former days? Even in the districts where a bitter hopped 9lb per qr is supposed to constitute the demand, it is an open question if the deeper senses, let alone the hearts and intelligence of the people, demand it. Custom again, for if we dropped the hop rate to 7 lb per qr, the consumer would kick for a while. Yet in the writer’s opinion, and attempting to view human nature of the day with some breadth and insight, the public would soon learn to prefer the lighter hopped article when it had become used to it. To the writer this question of hop rate is one of the most easily discerned and decisive points about modern Public Taste. The people themselves know it — if but subconsciously.

Do they know or visualise what really is their ideal in beer? Does it not seem apparent that custom decides this, the custom of the districts, and of a conservative people? How are we to reconcile the taste for acidity, common or peculiar to the cider districts, with the taste for soft drinking mild, free from the slightest acidity, pertaining to the next county?’
Posted by Adrian Tierney-Jones at 12:26 2 comments: Links to this post

The right beer at the right time

So there I was in the centre of Lisbon, researching the city’s food and drink scene for a travel piece and it was time for a mid-afternoon break, which I took in Martim Moniz, a fair-sized square dotted with food stalls. I grabbed a beer, a half litre of Sagres, you know one of the main Portuguese lager brands, nothing special, ok, cold and refreshing. The mood in the square was relaxed and ambient, with some sort of jazz playing in the background inter-cut with the sounds of people enjoying themselves. I drank the beer and I suddenly felt that here was a perfect beer moment. I didn’t need craft beer, I didn’t need cask beer, what I had in my plastic glass was just right, it was the right beer at the right time and I was even taken back a few years to a time in an old Paris bar where me and mate just drank whatever lager was on the bar, nothing special, but once again it was the right beer for the right time. Later on in the day, I went to a small bar in the Principe Real district that I’d read about and this time I plumped for a bottle of Sovina IPA, which was made by an artisanal brewery in Porto. It wasn’t bad and this time I was glad to be drinking something other than Sagres. I made the beer last and enjoyed it as the Lisbon rush hour passed on outside this tiny bar. I won’t want to drink Sagres for a long time, but on that sunny afternoon it was the right beer at the right time, which is perhaps an indication of how all beer has the power and potential to provide that special background to our lives.

Posted by Adrian Tierney-Jones at 11:06 4 comments: Links to this post