The last of the Christmas beers 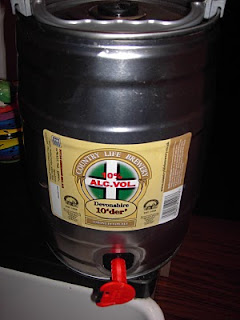 It was time it went, after all I hadn’t drunk anything from it since New Year’s Eve. I’m talking of the 5-litre mini cask of Devonshire 10-Der I got from Country Life just before Christmas. This is a 10% barley wine-strong ale hybrid produced by a North Devon brewery based in the most unlikeliest of places — a theme park devoted to all things ovine (The Big Sheep, great for young kids up to about 8 and there’s a brewery and shop onsite as well). Anyway, I thought it time that the empty keg was put out for recycling. It’s been in my cellar that is usually 6-8˚c at this time of the year. It had been vented as well so all sorts of changes were happening. There was only about a third of a pint left so I thought I would do a spot of responsible drinking. Wow. It was still and limid in the glass, a texture reminiscent of the silken waters of the Cam at Granchester, calm enough to swim in. Chocolate and roasted coffee beans, a fiery alcoholic nature and a rye biscuit dryness in the finish still enticed. Grown up and worthy of a cigar (if I smoked, which I don’t), silken dressing gown and a lambskin-bound edition of, let’s say, The Devil Rides Out (and the wind howling outside). Fortunately, it’s all gone now so the family are spared the above spectacle.
Mentioning The Devil Rides Out reminds me of the time my mate Mark got married several years back and he and his missus held the reception at a country hotel Shepperton way that was the home of Christopher Lee’s character in the original film. He organised a barrel of Alton Pride from Triple fff for the do in the evening. Top man.
Posted by Adrian Tierney-Jones at 19:52