So at 6.30 on a Thursday morning there I was at BrewDog 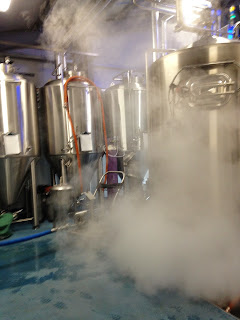 For how many years I have been visiting breweries I do not know. I would think that Highgate in Walsall was one of my first (Victorian gloom and low ceilings), or was it a flurry of what we called micros back in the venerable days of 1996/7? Impressed? Not really. At first, it was like the school trips to factories (I remember one to Ellesmere Port in particular, the smell of Swarfega and the strange texture of metal shavings), the noise, the smell, warm, spicy, beery, the wet floor, the trip hazard of a hose, the mystery of what malt does and how the hop has its evil way; the man in the white coat, the clip board, the age of the steam train, the cobwebbed vision, but that was then.

Things have changed and I’m at home in a certain type of brewery, whatever the size, usually one whose beer I am keen to devour (Stella left me Arctic cold last year though it was smiles all round when the brewmaster let slip that he thought the beer better dry-hopped as it used to be, a slip of the tongue he rescinded within seconds), and I have always wanted to try and see the brewery as more than a parcel of boilers and vats offering the potential to become as rich as Croesus.

So at 6.30 on a Thursday morning there I was at BrewDog.

It’s: beeps and the whirr of cogs and the deep breathing of a machine that does something or other; the lauter (or is it a mash, my notes say lauter though) tun gleams and glows, embraced in the grip of equally gleaming pipes and rods, not as squat as some I have seen, but sleek and tall, a supermodel of beer ingenuity. More sounds: the water for the mash emerging from its tank, a lapping sound, gentle, a pastoral sound at odds with the steel surrounds and the preciseness of temperature control, the latter a mathematical-like process that works with me standing still and opening sacks, the grain smashed and rolled and ready to spill its secrets into the warm water. Brewing involves waiting, is it a science, an art, a process, or an induction into a mystery? Why does this question itch away at me?

And on this early morning in BrewDog, where we wait before the pilot plant, wait for the system to start, I also think of the dignity of labour, the manhandling of sacks of grain, the graft, the industry, the collaboration between the malt and the water and briefly the senseless of an early morning start (we’d left the hotel at 6am). The water and the grain embrace, shake hands, US and Soviet soldiers meeting at Torgau in April ’45, while Nick the brewer turns the grain and the water, turns and learns and unfurls someday beer. As I stand there in the company of collaborators Matt, Brad and Jonny, I then imagine I might be in the bowels of a space ship with the hiss of steam, the hum of the engine, the clang of a tool on metal, all of which seem to occur in a strange vacuum of waiting. There seems to be a lot of waiting in brewing. 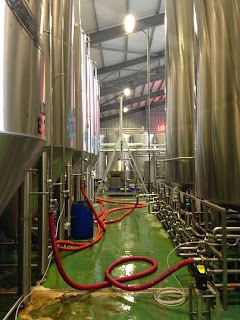 As time passes the big brewery, through a couple of doors, comes to life, the clinking parade of glass bottles in their slow serpentine crawl, down-to-earth visions of hi-viz jackets as staff check temperatures, wort flow, hop inclusion and god knows what else in this scientific theme park of a brewery. The columns of the kettles rise to the ceiling, a hi-tech, spindly version of the more rounded, variegated pillars that I recently observed in an Italian cathedral, and everywhere a labyrinthine network of pipes; how can the human mind comprehend such a maze? The canning line has an element of the fairground as cans pause on a slope for a second before rushing on their way, in a manner that suggests a big dipper. Outside we find ourselves in a forest of maturing tanks, in which an unwary traveller might get lost, more beer, a sign of BrewDog’s unyielding growth (and next door another brewery is being built).

And later on across the road, we go to a nondescript warehouse, a big garage, an unromantic looking sight, where 300 or more barrels rest with all manner of beers sleeping the sleep of the just, some ready for now while others ripe for blending. I try a snifter of Anarchist Alchemist, a 15% triple (or is that quadruple?) IPA that has been in an oak barrel since 2011: soya, salt, are you my umami, marmite, brett, farmyard, sherry, easily one of the most expressive wood-aged beers I have had for a long time. 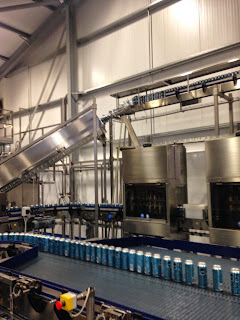 Back at the brewery, bustling, full-pelt, the tap open, a James McAvoy lookalike with a glass of Punk, we try Born to Die, a huge, Humvee-hopped 8.5% imperial IPA, assertive, juicy, fresh, savoury and bitter, a beer to be drunk within a month or so of its inception, a complete contrast to the sleeping giants in the barrel warehouse. There are other beers, conversation, the ever-present sighs and whoops and cheers and clangs and sine waves of the brewing giant a couple of doors away and once again I can see why some choose the path that brewing and beer offers. As I have said before, beer is a part of the way one can live one’s life, a gastronomic choice, that excites me as much as food, literature, music, sport, love, fun, laughter and everything else that makes up this complex puzzle we call life.

I along with Matt, Jonny and Brad were invited to BrewDog to collude on a beer, which we hope will be ready in a couple of months; it will be a tripel-style flavoured with peach and apricot, accompanied by a gentle sourness. We have called it Peach Therapy and I am looking forward to trying it.
Posted by Adrian Tierney-Jones at 08:13