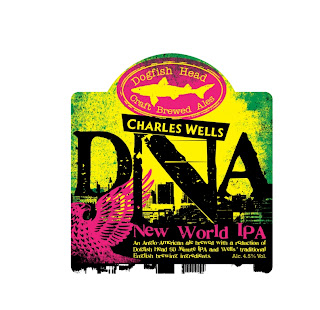 Here’s what I think: the Atlantic as a massive millpond, measured, calm and tranquil, its surface still and inscrutable. Here comes an American brewer (or many brewers) to throw in a pebble. Splash. The ripples shimmer outwards, keep moving, and reach all the shores that are washed by the Atlantic. The craft beer effect, perhaps? Here’s what someone else might think: an English brewer stands on the edge of the known world that is Great Britain sometime in the 1800s and does the same. Elsewhere in another great brewing country another brewer does the same and so the world’s great beers are born (though I’ll suspend the watery metaphor when we get to Groll and Dreher).

Last night I went to the Wheatsheaf in Borough Market to attend the launch of the Charles Wells/Dogfish Head collaboration beer DNA New World and sat there while first of all Paul Wells, then Jim Robertson and finally Sam Calagione explained the meaning of what seemed initially like an unlikely meeting of minds — Robertson and Calagione met often in the US, while the latter was intrigued by Wells’ Banana Bread Beer. As I have discovered at events like the International Brewing Awards, brewers are a fraternity, a Guild, a brotherhood even, and the battles that hobbyists and beer writers (a sharing of the same DNA sometimes?) are viewed with bemusement but also enjoyed.

As for the beer brewed over here (a US version will be made later in the year with Wells’ yeast — get to the Philly Beer Week in June for the launch), there I was listening attentively, expecting Calagione to let the assembled know how he’d selected American hops and suggested this or that, but let’s not forget this is Dogfish Head. ‘We did a reduction of our 60 Minute IPA and this was then added to the boil in Bedford.’ I woke up. The idea of the chef as a brewer, which I think Calagione has always championed. ‘Yes, it’s a reduction of one beer used in the production of another,’ he repeated as if he thought we couldn’t believe what we were hearing. ‘We hope it’s the start of a long relationship.’

The 4.5% beer is also dry-hopped with Simcoe and has an Henry Cooper’s fist of citrus on the nose, while the palate has the dryness I’ve always associated with Wells’ beers, leavened with a peach-skin fruitiness and an English (crystal?) nuttiness. I like it a lot.

And what I love about collaborations like this (Wetherspoons has done a lot to further this cause — Stone at Wadworth anyone? — though I have recently heard that these international partnerships are coming to an end) is that it opens everything out in the world/fraternity/Guild/brotherhood of brewing. Now is beer’s time.

And afterwards I had a few words with Calagione and asked the question that was bugging me. Extreme beer? ‘It wasn’t about strength but innovation and flavour. I’m not hung up on nomenclature.’

And in that millpond the ripples keep spreading.
Posted by Adrian Tierney-Jones at 11:49