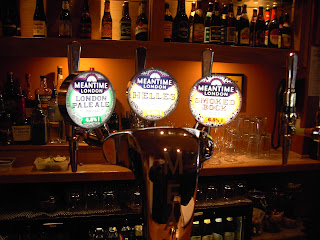 Just the other day someone asked me what I thought about CAMRA and I said that I no opinion (10 years ago I would have ranted on for ages about defending cask beer, promoting world beers etc). After a brief moment of contemplative silence I then went on for 10 minutes, arguing that CAMRA, one day, will have to seize the chance to celebrate all British craft beer, not just cask; that they needed their Clause Four moment, that they needed to ‘modernise’. What it came down to was that one fine day they will have to acknowledge a well-crafted British beer that isn’t cask is just as valid as one that has mellowed and matured in a cask. Thoughts along this way have been swirling about in my head for years, the result of late night conversations held at various booze-ups and events (I remember being quite shocked when someone at a beer dinner said that the second part of CAMRA’s name, ie Real Ale, was a bit of a prison; this person then went onto to point out that CAMRA had changed its name once before so it could do it again).
I think another catalyst for me was Meantime’s beers, which you never seem to see at the Great British Beer Festival; then there were the lagers produced by the likes of Cotswold and Freedom, once again missing from the bash. Will it be the same with BrewDog (though their cask versions of 77 and Trashy Blonde have turned up here in the Bridge in Dulvie)? It would feel strange to go to one of the greatest beer festivals in the world and not see a BrewDog (maybe they wouldn’t want to be there anyway?). After all, there’s a load of great beers from Germany, the Czech Republic and the US on draft — do they all meet the CAMRA criteria? I am told that they do, but is this the way they are served back home? Anyway, this isn’t a gripe about CAMRA — they seem more of a trade body dealing with such esoteric subjects as minimum pricing (which I don’t have an opinion) and OFT (whoever they are), rather than beer but then they are a pressure and campaigning group, so can you blame them?
What I wanted to write about has been covered by some but it’s also been buzzing about in my head for a while, helped on its way by conversations with brewers. The subject is: keg isn’t the devil, it’s bad keg that’s the frightener. I’ve chatted with SIBA members who don’t do cask beer (or do very little of it) and they have wondered what membership has to do with them, given that the vast majority of members are cask ale people. More recently though I hear that SIBA are looking at a category in their competitions for keg beer, though they will be calling it brewery conditioned. I think it’s a great idea (think the name needs tinkering with though). Jeff Rosenmeier at Lovibond’s producing some cracking beers but they are not cask; Freedom had that much reported ding-dong with CAMRA when they had to withdraw their beer from the Burton festival; Meantime’s Helles is a splendid beer but it’s not cask or bottle conditioned. I interviewed BrewDog’s James Watt recently and he reckoned that an IPA was better served brewery conditioned (filtered but not pasteurized I believe), the first time I heard someone say this. This is not an anti-cask post, god knows I drink enough of it in my local and on my travels, but I also adore  Meantime IPA (and any of their beers) from the keg and would like BrewDog’s lagers from the keg; meanwhile I drink filtered beer at home (unless it’s a bottle-conditioned beer that I have grown to trust through long experience) — they are all good beers.
I guess CAMRA will pooh-pooh the need for them to accept what is fast becoming a pluralist beer system (especially as cask is doing well but who knows how fragile this growth is), but I would like to think that sometime in the near future good cask (there’s crap cask lest us not forget) and good keg (for want of a better name) will co-exist in a beneficial spirit of mutual love at the bar and we will all gain something from this.
Posted by Adrian Tierney-Jones at 15:04