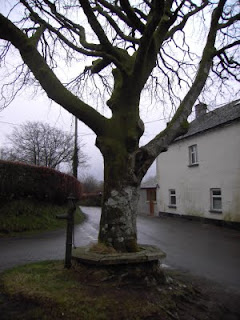 Even in this little rural outpost of Exmoor, we get beer: at 5.15pm this afternoon I received an email from Kenny at the Bridge. ‘Brew Dog 77 Lager on now...’ It’s a five minute walk down the road, right next to the River Barle, which eventually meets its destiny with the Exe about two miles away. At 5.30pm, having decided that my saison opening for an American magazine was coming along nicely, I was on my way. It’s the best beer on tap this weekend in Dulverton, and I say this having also thoroughly enjoyed several pristine fragrantly hopped pints of Tribute at my other local Woods afterwards. The countryside and fantastic beer, what a combination. This is not one of those Sodom and Gomorrah rants about the Moloch of the city, I love cities, but I don’t want to live in them and I glad to get home here after a day or so in London, Sheffield, Prague, New York, whatever So take a bow Kenny at the Bridge and Paddy at Woods. Hwyl fawr.
The picture is of a tree (obviously) in the centre of Hawkridge, a village four miles or so out on the moor, which has no pub but is exquisitely isolated.
Posted by Adrian Tierney-Jones at 19:35