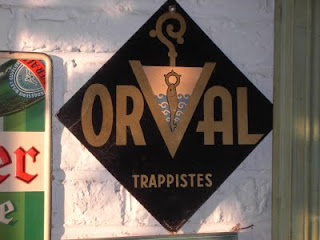 I’m in a restaurant in Wallonia, not a beer restaurant, just the sort of well-run place that caters both for visitors like myself and locals who fancy something different. As it happens I am the only one in there that night, having dashed in from a long rain shower and — shaking myself like a terrier who has been just been hauled out of an Exmoor river — I explain in my kindergarten French that the tourist board has reserved a table for me. I am offered the run of the house, were would I like to sit? Remembering that Wild Bill Hickock met his fate because he sat at a table that faced away from the door, I choose one that faces the door. Would I like wine I am asked by a young lad with spiky hair? No thanks a beer please, this is saison country after all. Carlsberg comes the reply. Even here in Tournai, it’s depressing that I am being offered a beer that I would be offered throughout most of Western Europe whatever the beer culture. No thanks, any Belgium beer I say, dreading Leffe, whose Tripel was a mainstay on a southwest France holiday in 2005, but whose blonde I find a Demerera-sugared irritation. He comes back with a tray on which sit bottles of Orval (ideal shapes for West Country skittles), Chimay Bleu, Stella and possibly Leffe, but as soon as I saw Orval my mind was made up. Orval it was — I love that beer, a beer that has the influence of Brett, a beer that is both so satisfyingly complex, moreish, creamy, bittersweet, palate refreshingly citrusy and as this restaurant shows quite commonplace. I am served turbot in a creamy shrimp sauce which is bossed over by the Orval, bringing out the creamy and citrusy notes of the beer and also cutting through the cream of the sauce. It is delicious. I remember that this is not haute cuisine, biere cuisine or even good gastro-pub stuff, it’s just ordinary for this part of the world. I sat there wondering where in the UK in an ordinary restaurant, you know the small town high street gaff with French cuisine pretensions, would you get such a wonderful and complex beer. In the UK some might have the local ale, a bitter or a golden ale, pasteurised to high heaven, but this is the local ale. No one else comes into the restaurant while I eat, which is fine — and besides I wouldn’t have noticed, so engrossed was I in contemplating and considering the Orval. Another thing that occurred to me, later on, in another bar, with more people about, well-fed and well-watered, as I enjoyed the rich orange liqueur-like character of Triple Karmeliet, was that there is no such thing as the best beer in the world — just the best beer at the right moment and in this case Orval in a touristy restaurant in the town of Tournay fitted that bill as snug as a bug in a very snug rug.
Posted by Adrian Tierney-Jones at 21:45