Going Wild in the country

Some of the best breweries I’ve visited sit in the middle of nowhere: Dupont, Kacov, Hook Norton and now Wild Beer Company, to where I walked for a couple of miles up and down country lanes on Saturday (home is hidden away somewhere between Castle Cary and Shepton Mallet, right on the eastern edge of Somerset, in a lovely little hamlet called Westcombe). The day was a sort of launch for the brewery, a chance to try some of their beers, to engage with their ideas, to meet up with the like-minded. Fresh was their signature pale ale, a button-popping, corset-stretching joy of a juicy, luscious beer with a bitter, dry, peppery finish. It was gorgeous. Scarlet Claw was a red ale, with Centennial in the boil and finished off with Simcoe. The malt bill is also intruging — Mild ale and Brown plus CaraAroma and CaraRed from Weyermann in Bavaria. It had a slightly creamy texture, silky almost, with lots of voluptuous grapefruit and pineapple notes, but also a delicious hint of what I can only describe as cherry-flavoured toffee. And then to the beer that Wild men Andrew and Brett descibe as ‘what we are all about’. Modus Operandi is described as an old ale that is then aged in wood and has wild yeast chucked into the mix. The earthy, chocolaty, Bretty, herbal, woody, vinous, cherry and balsamic vinegar nose just stunned me with its complexity. In the mouth it was a case of chocolate going off the rails, Brett in the train’s cabin pulling all the levers, while earthy sexiness, chocolate, cherry and soft vanilla passed through all the carriages before arriving with the sort of bitter finish that makes you realise why you like beer and want to keep drinking it. Or to put it another way, melodic and harmonic but strong willed in its character — Mahlerian perhaps. Possibly one of the best beers I’ve had this year and yet another indication of the way British craft brewers are really  starting to up their game. If you’re in the vicinity of Bristol this week, I hear some is being delivered to the Colston Yard…

Posted by Adrian Tierney-Jones at 11:29 No comments:

In the post the postman brings a copy of The World Atlas of Beer by Stephen Beaumont and Tim Webb, their attempt to cover what’s happening in the world of craft beer (I would have added ‘at the moment’, but things are moving so fast that the book can only provide a snapshot of a moment in time, something that Webb acknowledged when he wrote about the book in the British Guild of Beer Writers newsletter last month here).

It’s a gorgeous production, luxuriant and lush with photos of fields of barley caught in the sway, men and women on the mash and bronzed, Adonis-like streams of beer flowing with a Gambrinus-like sense of freedom. Webb and Beaumont are for my money two of the best beer-writers on the planet — forensic in their attention to detail, wry stylists and both imbued with years of traipsing round breweries, talking to people and drinking the beer. If Michael Jackson rediscovered Belgium’s great brewing heritage, then Tim in the manner of a Pointillist painter filled in all the dots; Stephen’s elegant brushstrokes of colour on beer, gastronomy and travel sometimes reminds me of Van Dyke or Reubens.

As the book’s title suggests, it covers the world, shining a spotlight on 35 countries and their beers. As with most books of this nature there are sections at the front about the raw materials and brewing modes, a couple of spreads about craft beer plus one spread about ‘High Volume Brewing and Convenience Beers’, which has long been missing in beer books (when I edited 1001 Beers I included several beers of this ilk because I felt they needed to be there, they couldn’t ignored).

A page is also given to styles and it’s clear that the authors are not fetishistic about this subject. This para is a good summation of their beliefs: ‘Unfortunately this (beer styles) approach has evolved into a morass of confusion and obfuscation, with it seeming at times as if every new beer is awarded its own unique style descriptor’.

It’s a delicious book, over which I have been drooling over and delving into for several days. If I have only one criticism it’s this: modern publishing likes photos, usually at the expense of text, it’s about connecting with a modern audience we’re told. Given the two writers’ expertise and pleasing manner of expressing themselves I could have done with more of their words.

While we’re on the written word, I’ve also been sent the second issue of a magazine called Doghouse, which styles itself as the pub and café magazine. It has lovely production values, a pleasing aroma of paper, is thick and just right to read in the pub, has an avalanche of words tumbling over the edge of the precipice, photos of pubs that you might want to enter and others you might want to give a miss, has the size and feel of Wallpaper, swells with an infectious liveliness and in this issue focuses on the borders and Marches of Herefordshire, but I am told by the editor that it will move about. It’s a valuable record of pub life, whimsical and occasionally rambling, but well worth looking out for. It’s £4.99 and I’d recommend going here to find out more.
Posted by Adrian Tierney-Jones at 09:44 2 comments:

Back from running, where on the way, I passed a stable, and on the fence, nicely folded, was a horse blanket, while from inside their boxes the two horses looked out at the world into which they would soon be ridden. The phrase horse blanket when used in relation to lambic is well-worn and perhaps spun out when the nearest the writer has got to a horse is some well-seasoned mince on a trip to Belgium (I seem to recall Martyn Cornell writing something on this recently). So I stopped and took a deep sniff, there’s nothing like original research. And what did I find? Manure, not unpleasant, the lure of the organic garden, old wet straw, autumn, earthiness, upturned soil perhaps after a shower of rain, horse’s sweat, like damp leather perhaps, a deep pungent strangely pleasing aroma that as I started running again I was able to fix onto my memories of lambic. It’s an aroma that has a lot in common with the orange, pine, banana and lychee notes we get on beer for instance, an aroma rooted in the land, a primary aroma that hasn’t been baked or manufactured (think biscuity or mocha for starters). And yes you can pick it out on some lambics but I do urge you to stop and smell next time you’re near a stable.
PS the use of the word blanket denotes something cosy and comforting but I often think that horse blankets are more like anoraks, which brings us back to beer.
Posted by Adrian Tierney-Jones at 14:40 3 comments: 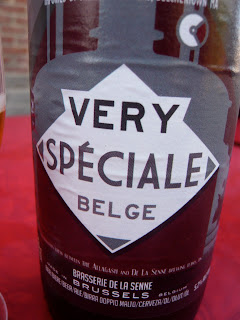 I did a lot of travelling last month, about which you can read here, here and here. My next trip is a bit more modest, at the start of November, to Brussels to act as judge in the first Brussels Beer Challenge. It seems like serious stuff — there are judges coming in from all over the world, including Beer Advocate’s Alström brothers, the ‘Beer Pope’ Conrad Seidl and the co-writers of The World Atlas of Beer Tim Webb and Stephen Beaumont. It should be fun. Reason I’m mentioning the event is that the closing date for submitting beer to be judged is this coming Friday and I know that the organisers would like to see more British beers. So, I’m doing my public service thing for the event (for which I am not being paid, though accommodation, travel and sustenance is being covered) — if you’re a brewer (or the friend of a brewer) then maybe it’s worth having a look to see whether you should enter. I don’t normally do John-Bull-howay-the-lads patriotism, but it would be nice to see some Brit beers amongst the winners.
Posted by Adrian Tierney-Jones at 16:57 No comments: