Fruit of the (IPA) Boom

Do I want a fruit-infused IPA? Of course I don’t and I’m even more certain I don’t want one when I drink a can of Vocation’s gorgeous Session IPA Heart & Soul, in which the soul of passion fruit and grapefruit shines through courtesy of whatever hops are being used (I’m too lazy to check out the varieties); it’s a gorgeous beer, juicy and luscious and loose in the way it tempts me to open up another can. But it also makes me think, especially as I see that a few Mystic Kegs are predicting that IPAs with fruit in them are going to be humongous in 2016. It will probably be true (and I do so wish I had their skill when it came to horses) as breweries that I really respect are putting all their Carmen Mirandas in some of their IPAs, which I presume is something to do with the apocalyptic hop shortage that is coming our way (it always makes me laugh that there’s a hint of the Daily Express’ annual approach to winter in July — ie Coldest Winter on Record — in the way the shortage of Simcoe and co is being reported), which is why some people are turning to fruit. I’m all for stretching the boundaries of what constitutes beer, but I cannot help feeling that adding fruit to an IPA is sucking up to a sweet-toothed crowd in the search of the next gimmick. But then that’s me and I’m probably completely wrong. It’s just that I like rice to be used in risotto, corn to stay on the cob and fruit being directed, traffic cop style, to either the maturing tank in a Belgian lambic brewery or the kitchen blender rather than the brewing kettle (and on that note I hope no one thinks that the next trend is veggie or vegan beers — in 2013 I tasted an artichoke beer from Puglia, it was dire).
Posted by Adrian Tierney-Jones at 08:30 9 comments: 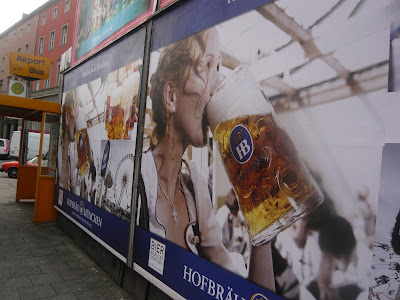 One photograph was taken in Munich during Oktoberfest in 2012, while I was waiting for the bus to take me to what is laughingly called Munich-West Airport; the other snap comes from a visit to Pivovar Zatec three days before. On that Saturday morning I think I was drinking their 11˚ beer, which was superb (my notes: ‘delicately hopped, good mid palate sweetness, dry semi-bitter finish that lingers, grainy undercurrent that gives it a crisp chewy character’). 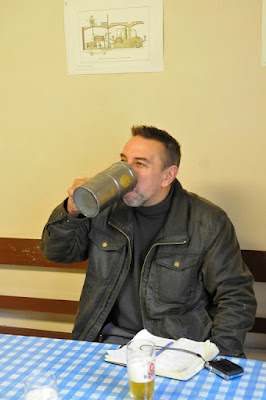 There is an immense sense of joy in drinking beer that those who come up with guidelines about how much we should drink seem to miss. There’s a sociability about it when it’s drunk in a bar or a pub — the beer is a bridge between people, transporting ideas, jokes and gossip, lightening up moods, bringing on smiles and also giving you a chance to make friends, especially if you’re a new kid in town (yes of course there’s the dark reflective nature of too much beer but I’m a grin reaper rather than a grim reaper). So then there’s that moment when the first beer of the day hits ground zero in your mouth, washes over the palate and calves great chunks off that iceberg that we call day-to-day life, the cares and hairpin cracks that we carry with us are gone for a while. More people should try it.

Posted by Adrian Tierney-Jones at 08:30 4 comments:

Email ThisBlogThis!Share to TwitterShare to FacebookShare to Pinterest
Labels: Beer

Yesterday I asked a brewer what was the reason for the apparent decline of a type of beer that remained comparatively popular but seemed to have been in decline over the past 20 years. This was a beer that also has a history going back over a century.

Was it changing trends, younger people drinking this or drinking that? Was it the onset of clever advertising for rival brands, for beers that maybe made people feel better about themselves or maybe convinced them that their beers had less calories/units/whatever?

His answer was simple: fashions change and styles change with them. When he was in college my brewer drank one kind of beer that was drunk by everyone around him; then another kind of beer became popular and the beer from his college days declined until it rose again. Now the style of beer we spoke about was in apparent decline but it would come back again my brewer opined. Everything changes.

Before anyone mutters mild or builds a barricade for Black IPA/India Dark Ale, the brewer doesn’t make his beer in the UK and the beers he drunk aren’t made in the UK, either. Where the beer is made is irrelevant — though I have always said that there are reasons why some beer styles die on their feet: they’re horrible, but then again that’s my opinion, which hasn’t stopped mild from being the, er, comeback kid of the past 30 years.

However, what is relevant to me is that with his comment a secondary point seemed to be worth thinking about. Throughout the 70s/80s/90s and beyond for all I know, the rise of faux-lager and nitrogenated smoothies was seen as the consequence of the wool being pulled over drinkers’ eyes; of them (mainly men) being seduced by clever adverts, flash posters and the promise of a lifestyle beyond their dreams.

Really? People aren’t children (unless they’re children of course and some of them are pretty smart), they know how to make choices; they are conscious of why they drink this over that (those of us who suggest these lager/smoothie/good-knows-what drinkers are swayed by advertising can go away and give ourselves a pathetic illusory superiority pat on the back). There were a lot of reasons why these beers took off, but people weren’t stupid.

So the next time, you hear someone rant about ‘stupid’ people drinking beers that this person doesn’t like, remind them that life changes in the most random of ways (not too forcefully I hope, I’m not advocating a barney in the pub). But it does change, which in some ways is the reason why I, for one, continue to be swayed and somersaulted over and over again by beer, its varying moods and its continual surprises.
Posted by Adrian Tierney-Jones at 08:30 3 comments: