Occasionally, sometimes, when there is an r in the month or when there is a moon that is suggestive of a time I never really knew, I find myself wishing I’d never put my head (or was it my nose?) into that first sack of hops. That I had never been beguiled and bested by the flurry of aromatics emerging out of the sack, the rough, textured Hessian sack into which a cluster and concentration of dried hops were packed, squeezed and suffocated into, expressing their individual identities cone by cone. Was it at Moor Brewery in late 1996 when I was writing my first piece for What’s Brewing? Or perhaps, ironically, given what the brewery was best known for, Highgate Brewery in 1997? I can’t remember, but all I do have a certainty about is that from this moment (of which I have little recollection) I was possessed of a passion for the aroma of hops, not a love as that is something for life, but a passion, a lust perhaps, a kindness and a benevolence towards the aromatics that hops bring to my sensorial world. Since that time I have sniffed my way around a world of hop sacks (and even crushed up hop pellets in order to smash up the aromatics and let them play their way to my brain).

I thought of this journey, this Jedi-like awakening as I stood in the brewery at Redwell on Saturday morning, while Dave Jones, the head brewer, worked out the hop ratio for a beer he was brewing called Hop Rocket. Chinook was one of the varieties engaged, Centennial perhaps and I stuck my nose into the container that was holding the first wave of hops. The aroma was green, chive-like, tropically fruity, pungent, musky even. We discussed hops, we discussed malt and what malt could do, we discussed beer and coffee beans and like a circle we kept coming back to hops. ‘Try this,’ and I was given Bullards’ Summer Ale, which is also brewed here. Whatever your thoughts on a brewery buying the name of a long gone brewery and brewing beers with their name attached to them and with little link with what the beers tasted like (I think British brewers are confident enough now to be able to celebrate the past, their forebears, those that came before them and besides as Jeff Alworth here argues maybe not everything in the past was good), I found this beer to be exemplary: juicy and bursting with flavour, with the kind of bitter dry finish that clangs away with the insistence of a warning bell. And once again I was drawn to the persistence of the hop sack and its influence on my senses. Oh how I do love the hop sack but sometimes, just sometimes, I have doubts on whether it was a good move on that long distant day when I let myself be led to the hop sack.
Posted by Adrian Tierney-Jones at 16:40 1 comment: 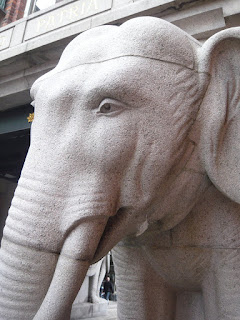 One of the books I am currently working on is an anthology of some of the best writing on beer from across the centuries and featuring writers from around the world. This is something I found in a wine-focused book called Stay Me With Flagons, which was published in 1940 by Maurice Healey. This is from the chapter headed Beer and Cider.


‘Lager seems to owe its otherness to the method of its fermentation. When after the last war I was trying to get beer for the troops in Germany I got one letter which spoke of “our by-a-special-process-top-and-bottom-fermented-beer.’ I felt it must be good with a description like that; and I ordered a consignment. It was good. English beer, on the other hand, is apparently only fermented form below. Also, hops are supposed to play a large part in English beer; I do not think that lager contains hops, but it usually betrays the presence of more than a touch of garlic. I know of no scientific reason why lager should demand icing to be served in perfection, while English draught beer is undoubtedly harmed if its temperature is brought down to anything below what would be described as coo. Our beers are more potent, also; ‘One over the right’ is a phrase to indicate drunkenness, whereas I have myself put away 31 litres of German lager  in one twenty-four hours, without being conscious of any evil effect. I may add that this statement so shocked the editor of The Listener that he twice cut it out of my contributions to a teetotal controversy in the columns of his paper. But there is really nothing to it. The late Father Tom Finlay, one of the wisest of men, once told me that when he as a young Jesuit went to Munich to pursue his studies, the Master of Novices addressed the young arrivals in friendly warning: ‘You will like our beer,’ he said; ‘and you will perhaps be tempted to drink more of it than is good for you, not knowing its powers. Well, I would counsel you to set yourself a limit, and not to exceed that. You may not know what limit to set yourselves; my own limit is 17 litres a day, if that will serve you as a guide.’ So I think that a tourist on holiday at a more mature age need not be ashamed of having merely doubled this minimum.’
Posted by Adrian Tierney-Jones at 09:35 4 comments: