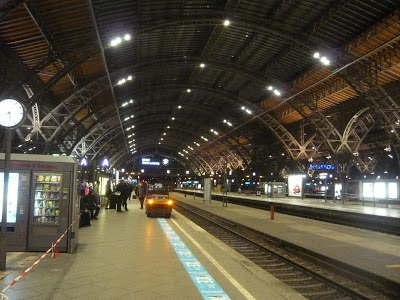 The train of thought begins with an article by Ray Anderson in the excellent Brewery History, autumn 2012, One Yeast or Two? Pure Yeast and Top Fermentation, which is about the production of beer using a single strain of yeast, as instigated by Hansen at Carlsberg in the late 1880s. It then passes through London not long afterwards with Hansen trying to persuade British brewers that a single (pure) strain was better than what they used.

It’s all aboard for Copenhagen (and Carlsberg again) now where Claussen isolates the organism ‘responsible both for the condition in [well conditioned English stock beer] and for their flavour’. He calls it Brettanomyces. The rest of the journey passes most enjoyably, as journeys do, and then in the last paragraph Orval and the work of Tomme Arthur (with particular reference to Cuvee de Tomme and its use of a strain of Saccharomyces cerevisiae and three Brettanomyces variants] are referenced — and a sentence leaps out at me: ‘We may see further developments along similar lines in the future as free-thinking brewers search for diversity of flavour in their products.’

I’m reminded of TS Eliot from The Wasteland, a poem that was a constant companion in my 20s: ‘We shall not cease from exploration and the end of all our exploring will be to arrive where we started’. Which I think is an excellent summation of the adventurous breweries making beer at the moment; they don’t always get it right but more often than not they do — and what they are doing is rediscovering what went before and we arrive where we started.

The train of thought isn’t over yet.

The train idles in the station, waiting for a driver, and this gives me enough time to think about: how some folk think it’s so wrong to put beer into 750ml bottles as if there is a cosmic law that beer should remain in a pint glass or a 500ml bottle, after all no one complains about Jeroboams; how the whistle is not blowing hard enough for session beers or even table beers, beers that you can drink all night without ending up wearing your trousers back to front (I always like to finish with a couple of stronger beers, but then I used to drink port once upon a time); how the ‘end’ of the extreme beer ‘cult’ is applauded as if a dictator were being lynched (though yesterday they lunched him) and yesterday — over at one of the most incisive and intelligent UK beer blogs — there is fretting over breweries that do something different and perhaps survive on a small obsessive fan-base.

I’ve had my say over there, but with all this fretting about beer being big and bold, noisy and noisome, hoppy and happy-clappy, Bretty and bigtime, unfiney and piney, popular with transient hipsters, innovative when nothing is new beneath the sun, I do wonder if the fretters (people of all beer shades of opinion) perhaps forget that some brewers genuinely want to create new flavours, new collaborations, new ways of delivering beer (though new as in West Side Story was a new story even if it was Romeo & Juliet brought to modern life) .

I like the idea that styles and the idea of what constitutes beer can shift shape, even though the stolid beers of the ‘I know what I like’ crowd still rule the roost at the bartop; I like the idea of  beer connoisseurship (and before someone makes a point about beer connoisseurship being some sort of fancy-pants, cheer-leading, holistic PR guff here’s something else from Ray Anderson: ‘a considerable amount of acid is formed, accompanied by ethereal substances, the taste and flavour of which cannot fail to attract the attention of any connoisseur by their striking resemblance to the flavour of stored English beers’ — Claussen, 1904). I just like what beer can be capable of.

And on this train there’s music and when I wrote about music I enjoyed bands such as Blue Nile, Hula, Microdisney but then I also liked Sonic Youth, Einstürzende Neubauten, Soviet France, The The and on another spectrum Nick Drake, The Smiths and the Monkees. I’ve got similar tastes in beer.
Posted by Adrian Tierney-Jones at 08:30