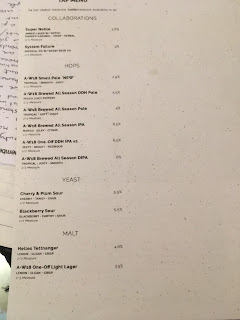 Scraps of conversation swirl in the air, torn pieces of paper, rising, whirling, falling, settling on the ground — sour mango salt two weeks same pale ale cold chain time — phones are handled and deployed, words tapped out, memo to self, this is what I drank last night, the rumble of trains above, deep, brutal, an imagined blow to the solar plexus, the echo inside when I knuckle tap the corrugated metal that lines the walls, reminiscent of the kind of container architectural fantasists might call home and the rest of us a container. There’s a daub of colour on a banner at the back of the railway arch (for this is where I am), with more colour-filled banners tacked to the curved ceiling. The bar in the corner has wood for its counter, but below, its base looks as if it wouldn’t be out of place in a garden centre feature. The beer menu is printed on plain paper, with the beers listed beneath the titles of yeast, malt and hops. I have a 2/3rd glass of the Helles Tettnanger, which with its light grainy malt, clean lemony notes and dry and juicy finish reminds me of fresh Augustiner Helles. I then have the Super Noble, an amber lager brewed in collaboration with US brewery Notch. It’s rather delicious, cool and crunchy, full-bodied and boding well for my soul with every sip. Meanwhile, more drinkers talk and amble and gesticulate about me, a crowd of boots and trainers and the odd pair of brogues and hoodies and pea-jackets and a couple of dogs. Not bad for the first night of the Cloudwater Bermondsey tap.

• Early days I know, it needs time to warm up, it’s a bit cold perhaps, but it’s early days and I will be back. 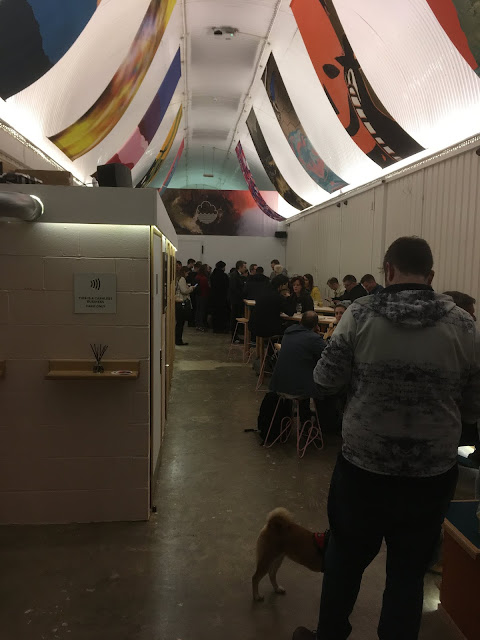 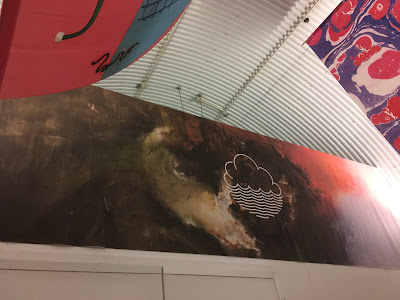 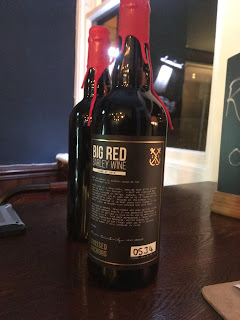 A well-made barley wine is a thing of beauty, a palpitating, purple rose of a beer style, enchanting and heart-felt and made for sipping contentedly by the hearth, while outside the elements screech and preach like the Harpies of legend. A well-made barley wine is proof that the gods are on our side and are sending thunderbolts in all directions celebrating the proof that malt does more than Milton can to justify their ways to us down here on earth. I had a barley wine in my glass in front of me on a damp and drizzly night towards the end of last week, where even the Harpies stayed at home and watched reruns of the Bake-offs featuring Mary Berry. I was in a pub as well, not in my favourite armchair, as drowsy as a dog whose day has been spent chasing rabbits and wading through marshes; I was in the Grapevine, in the we-all-like-to-be-beside-the-seaside town of Exmouth, an evening in the pub, in the company of licensee Ollie Bainbridge, who also brewed the barley wine at the back of the building in his Crossed Anchors brewery. It is a handsome looking bottle, 750ml, with a wax topping that looks like Vincent Price should turn up and start delivering a soliloquy from Edgar Allan Poe. However, instead of Price, who I know is dead, but he did once play a dead man who was kept alive by hypnosis in low budget version of a Poe story, so who knows, Ollie tells me about the beer: ‘I am a big fan of allowing malt to express itself,’ he says as he cuts through the wax, ‘We brewed it in August and Jonny Mills helped me design and brew it. It was a 12-hour brew day and we did a double mash. We used Maris Otter, crystal and chocolate malt, alongside a hop variety called Warrior. This was Jonny’s idea, it gave a very clean and bitter hoppiness.’

I saw and I drank the beer and let it conquer — it was as dark as the depths of an old forest where the ghosts of Varus’ legions fell, though gleaming crimson tints at the edge suggested hope. Complexity swirled out of the glass: chocolate, dark fruit, toffee, cherry (cherry liquor even), whilst each taste brought in more chocolate (truffle perhaps), cherry, an alcohol warmth and hints of coconut and vanilla. The bitter finish was firm yet gentle. I took another sip. And another.

Well-made and not afraid of resting in the shades, Big Red (as it is named) is a well-made barley wine and a thing of beauty. I now need a night of wild elements before I open my bottle.