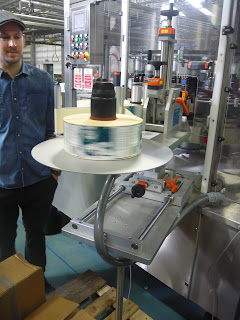 Posted by Adrian Tierney-Jones at 09:00 No comments: 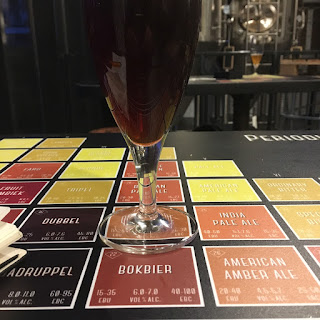 What colour do you think that this beer is, I ask a friend and fellow judge at the Dutch Beer Challenge (to give it some context we are are at Brouwerij Noordt in Rotterdam and drinking its Bok). I suggest the colour is mahogany brown, but he says it reminds him of the teak coloured deck of a sailing ship, which is perhaps an apt description, as the river that has made Rotterdam is only a street or so away. And then I think of the connection with the open sea — the beer is cold, 5˚C perhaps, a watch bundled up and shivering on the deck in the Atlantic, and then I think of the great steel ships abed in the harbour, the ships I’d seen earlier in the day, standing at anchor, their hulls a story of the travels that had taken them about the world. Then I smell the beer, the chocolate and coffee on the nose of the Bok, which suggests to me the emotional cargoes of Europe brought to the port, a history of several centuries brought together in a glass. Then there is the alcohol, 7%, alcohol that combustible constant of civilisation. The beer is also crisp and cold — a night spent on deck, keeping watch, crossing the Atlantic, and then there is more coffee and chocolate, followed by a brisk carbonation and finally a quick finish, as if this beer suddenly decided it wanted the BlueRiband. The tales that beers do tell.
Posted by Adrian Tierney-Jones at 08:30 No comments:

Are sours the new alco-pops

A train of thought is waiting at the station and if you don’t mind it’s waiting for a new passenger: ah here they are, a little late but on they go. Are sours the new alco-pops, asks the passenger to no one in particular. One person looks up and asks in what way are sours the new alco-pops and the answer is shot straight back, down a well-rifled barrel: when they were first introduced alco-pops were seen by some as easy going drinks that those hitting 18 went straight to, an easy avoidance of trying to work out trying to get one’s tongue around the contusions and customs of bitterness? And did those who walked the green hills of ancient pub land have to work so hard and heft their shoulders to the wheel before they left the sweet seductions of their childhood behind (though lager/bitter top and diesel are remainders of this memory of times gone by), while those who enter this magical world through the portal of sours not have to do much at all (hence the comparison with alco-pops).

And so why does this passenger think that way? The other night they drank a can of Chorlton’s Amarillo Sour, followed by Cloudwater’s Vic’s Secret Tart IPA, both beers going down as easily as a soft drink, despite their relative alcoholic strengths of 5.5% and 7.3%. They were, I was told by this passenger, juicy and restrained in their sweetness, while the tartness was unbridled in its friendliness and sense of wonder, like the face of a child, eyes closed, slyly smiling, as it lifts its face to a warm sun. They were both beautiful beers, of which the passenger said ‘I could drink deeply’. They were also both what are generally called sours,

Similar thoughts had whisked over me with the soft petulance of a feather duster a couple of weeks ago whilst giving a talk at a beer conference in Cusco, Peru, on the state of sour beer in the UK — within the audience of brewers, both newly pro and stay-at-homers, there was a real interest in sour beers, with several putting their hands up when I asked who was making a sour. A few days before I’d also filed a piece on sours for Imbibe magazine, making the point that sours had the ability to appeal to those who had always said that they didn’t like beer, ie wine drinkers who like their acidity, of which there is plenty within a sour beer.

Sours (or wild beers or acidic beers, or whatever you want to call them), when they work are exemplary in the way they both tease and trounce the palate with their visions of a beer beyond what we know as beer. They have the ability to shush the palate and to rush their way along the gustatory highway to deliver refreshment and also compress sensations of acidity, juiciness, sprightliness, dryness, saltiness, tartness and a piquant bitterness all in one. And because they have the ability to introduce those who say they dislike beer they are the new alco-pops, but on the other hand I hardly think Amarillo Sour is the new WKD. But you never know.

Posted by Adrian Tierney-Jones at 06:54 No comments:


Here is an IPA, an India Pale Ale. Hazy, orange-yellow in colour, flurries of tropical fruit (ripe fruits sitting in a bowl in a sunny kitchen, on a pine table) emerging from the glass like the furies of Greek myths, benevolent though, beneficial even, bending one’s thoughts towards taking a sip or maybe a complete submergence in the beer. Petrol, as in Riesling, tropical fruit, that ripeness again, that sun-stroked ripeness, and then a dry rasping finish that lingers like the memory of a long lost love affair. That savoury allium note of a West Coast IPA (the Pacific rather than the Cornish Riviera), the tropical fruit sweetness and pungency and sensuality, the dry graininess of a malt backbone, the charkas of grain, and that dry finish all combine, a combination once forbidden and now bidden to all, and create an assertive and expressive IPA, the dominion of lupulin. And outside in the sun, the foothills of the Andes rise, steep and sudden. This is IPA country but it also the Sacred Valley of the Incas, and I have been drinking Inti Punku IPA from Cervecería del ValleSagrado and immersing myself in it with the rhapsodic and revelatory nature of a traveller who’s found themselves in a new land and discovered a small slice of home.