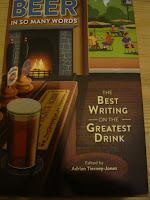 I’ve always been an advocate of beer writing, that it can be valid as film, music or food writing (there are even beauty and luxury journalists these days for heaven’s sake) and this belief is in concrete, physical form with Beer In So Many Words, the anthology of beer writing (right) that I have edited and which is out next month. I’ve just received a copy of it and even though I’ve written about a dozen books I still have that excitement on receiving a copy of a new book. There are some great writers in it from the current wave of beer writing, both from the USA and the UK; we also came across some little gems on beer and pubs that I’d not seen before, such as Hemingway’s PR letter for Ballantine, Ian Rankin on the pub and Ian Nairn on CAMRA and cask beer. I’m very pleased with it and I hope that the writers inside its covers (those still alive that is) are equally pleased. And yes, there is definitely enough good writing out there (and in the future) to think of doing a second volume if this sells well enough.

I haven’t really lost my mojo when it comes to this blog given the paucity of content in the past few months — when I’ve been writing all day the last thing I want to do in the evening is write, or maybe I’m just getting lazy, or maybe I feel that I have said everything I want to say. Maybe not with the latter, I still have plenty of words but it’s just a case of ordering them into something that resembles sense.
Posted by Adrian Tierney-Jones at 10:25 No comments: