Are home-brewers the real craft brewers? Untrammelled by the need to sell their beers or place them in front of the drinking public, who will then decide whether to buy or not, home brewers can make what they like without fear or favour; their beers also remain close to the original maker, so there is no concern about parties further down the line of distribution making a hash of serving them. True, if they enter competitions, then the beers are judged by their peers, but there is no concern for trends, financial constraints, indifferent bar staff and the fickle nature of beer geekdom. Is this the nature of true craft, of authenticity even, this isolation, this solo path, that the home-brewer, like a wandering monk sworn to discard all earthly pleasures, takes?

If it is so, then why does a home-brewer then decide to become a commercial brewer, to be sewn into the fabric of the market and drinkers’ trends that some could think are a stifling clamp on creativity (‘what do you mean, my Milk Sour Chocolate Tripe Tripel wasn’t popular? The dog and my mum liked it. Ok, here’s my Sunny Delight, I mean NE IPA. Sigh.’)? What would have happened if Martin Dickie had remained a home brewer after his tenure at Thornbridge or Evin O'Riordain had stayed in the world of cheese and solely shared his beers with his confederates in the London Amateur Brewers? I suppose someone else might have come along, but Martin and Evin entered the market and this someone, who never came along, remained the unknown home brewer who stayed at home, his or her name unsung and invisible on a par with the composers and poets that we never ever heard of because they also remained silent at home.

Are those who keep journals and diaries, untouched by the whims of editors and the dictates of space, the real authentic writers? Those who make music in their bedrooms, bake their own bread, or even train online to be front room lawyers, the real practitioners of their craft? What is authentic? What is craft? What is it that motivates the home-brewer, the home-baker, the home-writer and the home-lawyer to make the transition from this meditative silence of home to the noise and disruption of the market?

Posted by Adrian Tierney-Jones at 09:48 No comments:

Ever fallen in love with a beer you shouldn’t have?

We fall in love with the wrong people, the destructive people, the people who want to shine in the flames of ruined towns, the people who want to lock the door and never allow anyone in ever again, the people who don’t actually know you exist, the wrong people. Do we fall in love with the wrong beer? Is that possible? Should it be possible? What is the wrong beer? If I fall in love with a pale barley wine and drink far too much of it tomorrow and the day after and the day after and eventually I find myself rummaging through bins in the big city in the search for food having spent all my money on this beer, is it the wrong beer? Or am I just the wrong person in the wrong (or even right) place? What about that beer that confers on me the sainthood-like confederacy of being joined to something that I swell with pride about or that I feel makes me walk a bit faster and a bit taller? Is this the wrong beer? Is this the sense of pride? Can the beer that you have fallen in love with and shouldn’t have be the wrong shade in the glass, a chestnut brown that gleams like Bruce Forsyth in his prime, or shimmers like a dream that you are desperately trying to return to at 5am, aware that the alarm will soon be barking in your ear like the dog you had when you were a child and sometimes still miss? There have been moments when an exemplary Best Bitter has been that beer, a hangover, an old makeover, a bothersome beer, though it doesn’t do as much for me as a Franconian lagered beer with its layers of flavour and pleasure and recognition that beer can be something more than this sin of wrong-doing. Should it be a beer that everyone drinks, a beer that screams and howls like a crowd-pleasing guitar solo, but you really know that you feel a little bit smaller on drinking it, letting yourself down, letting your friend down, letting the person who used to get excited about artisanal and smallness down, like a stricken Zeppelin falling to earth, Wagnerian in its fire and fury? A duplicitous DIPA, all flails and fury, stripping the tongue like a barbarian in training, gilding the tonsils with illustrious hails of hop curiosity and after far too much glasses of good-natured insobriety toppling the Gulliver of a drinker you have become. Have you ever fallen in love with a beer you shouldn’t have?
Posted by Adrian Tierney-Jones at 09:00 No comments: 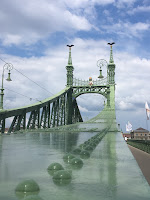 A tram passes by with a sound like a half-hearted roar from a bored lion; the Danube seethes and swells with the rhythm of a massively erratic heart; a family sit on the steps below me, drinking pink champagne as if toasting the progress of this mighty river.

Would you like a beer, I ask myself. Yes, comes the reply, as if it from the malevolent dummy that toyed with Anthony Hopkins in Magic, though my inner voice has a little more benevolence. Gellért Hill rises across the river, a big cheese in Buda, and I reach it across the Liberty Bridge, which looks like it was made with a Meccano set.

I’d been told of a cellar, its name simple: Keg. I found it on Orlay Street, a brick-lined space with a long bar (and yes there were Edison lights) and a digital display of the beers on tap; 33 taps btw. What did I like? Well, I couldn’t resist Mad Scientist’s Liquid Cocaine, which was an energetic DIPA packed with hop synergy and a resiny dry finish (a little bit of Budapest that was forever Portland perhaps?). 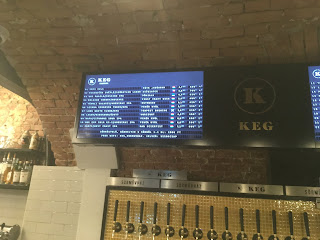 I wondered what the Portman Group would make of the name.

I also enjoyed the softness and calmness of Fóti Pils (a brewery that Evan Rail wrote about in the last edition of 1001 Beers) and then I stepped out back into the heat and sun of a Budapest June and just around the corner noticed the Hotel Gellért Gyogyszallo, which with its balconies, turrets and towers looked like it had been carved out of the hillside.

Later on, like many a beer tourist I went to Élesztő, a potent ruin pub in an old yard, with a cracked glass roof, bare brick walls, wooden tables and chairs, a worn concrete floor, a tree growing in its middle and there was yet another glass of Liquid Cocaine. I like this beer.
Posted by Adrian Tierney-Jones at 09:00 No comments: