The hanging hooks of a pub’s imagined past 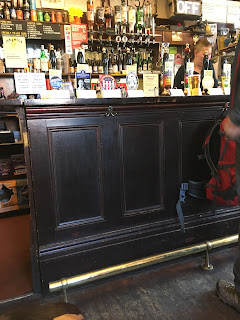 Here we are in the Alexandra Hotel in Derby, a two-roomed trad pub that is always somewhere I make time for whenever I have time in Derby (maybe I’m also paying my respects to the late Simon Johnson as this was where the two of us ended up after a fun afternoon of drinking not long before he died). And so I sit with a glass of Pentrich Citra IPA (hazy, plumpish in its fruitiness and rapier-like in its bitterness) and there is a joy in my heart as I note the hooks that hang beneath the brow of the scuffed, dark brown bar. It’s a habit I have, a tradition perhaps, or maybe a nervous tic, but all too often when I find myself standing (or sitting) at a bar, elbow in a puddle of spilt beer and crushed crisps, I always put my hand beneath the brow and search for a hook, usually something on which I can hang my rucksack (just like the chap has done in the photo). It’s a neat little aid, a helping hand to the drinker, perhaps even a link with the kind of imagined past that some pubs are so adept at.

Posted by Adrian Tierney-Jones at 12:09 No comments: 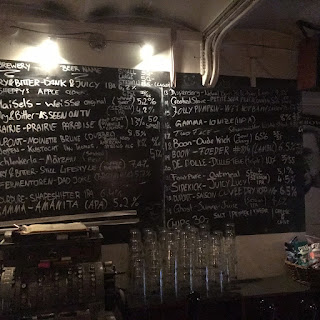 Here’s a brief thought on the ostentatiously opaque beer saga, which seems to be excising so many fine minds at the moment. Last week, at a Mikkeller in Copenhagen I noted men and women enjoying glasses of ostentatiously opaque orange-coloured beers— they were sniffing like pros and sipping with ease and enjoyment. As I watched I wondered if these IPAs (of a kind) were the beer version of bucks fizz or sangria and then continued to ponder whether there was a time when wine purists went gaga over such a mix. This is a completely unscientific overview but from my observations (and at Warpigs as well) it did seem to me that a lot of women and men were interested in these kind of ostentatiously opaque beers and also that these drinkers were different from those who drink beer as a badge of honour. Perhaps it’s a case of these drinkers having a liking for ostentatiously opaque alcoholic fruit juice and breweries being businesses have to respond (recently I have heard from two brewers who were rather dismissive of well-received and popular beer styles they have produced — think fruit IPAs amongst other on-trend styles), so getting annoyed over ostentatiously opaque beers is a waste of time and effort perhaps. But back to the beers being drunk in Copenhagen, one of my favourite beers that night was a juicy and lustrous, muscular in its mouth feel, Dank & Juicy IPA at the marvellous Fermentoren (above). Ostentatiously opaque naturally.
Posted by Adrian Tierney-Jones at 11:06 No comments: 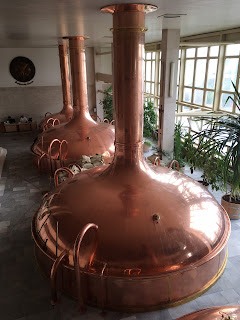 Two breweries. The division, time and distance, 1895 the year Budvar was kindled, in a town where German was the spoken word, while 2016 was when Lost & Grounded took root in the fertile soil (metaphorically speaking, in a sort of English) of Bristol. Both of them I visit in the space of 10 days, drink the beers their brewers produce, spend time amidst the gleaming turrets and tanks and spires and flights of fantasy that brewing kit (whether stainless steel in its nakedness or clothed in a copper carapace) seems to inspire in me. The brewing space in Budvar has the stillness of the cloisters about it, the monks nowhere to be seen, bending the knee in their devotions in another space perhaps, while Lost & Grounded was a boisterous space of people drinking and appreciating and listening to beats from an another age (a DJ like a warrior throwing out his views on the world). In Budvar, as well as beers drunk at different ages, I tasted the water, bright and as clear as the air in a mythical mountain range straight out of Thomas Mann. It had no mineral character, or either salinity, both of which you would expect to pick up in a brewery’s water. It is neutral and plain in the taste with a purity of a child’s voice. 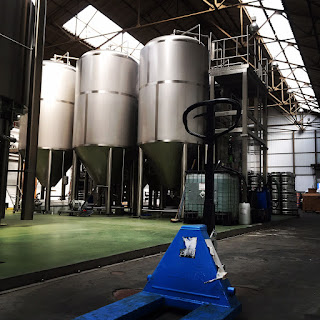 Meanwhile, at Lost & Grounded, I tasted collaboration. First of all, Accidental Icarus, a beer the brewery made with Verdant: oily, a fruit bowl ripeness, sub-Saharan dryness, and hints of basil amidst the centre of the palate; then there was Burning Sky’s Les Amis du Brassage, a collaboration with New Zealand’s Fork & Brewer, a three year old saison aged with a 10% blend of Girardin lambic in Chardonnay barrels. Lazy and bucolic in the glass, juicy and citrusy and tart and peppery, it called to me with the yearning of a slow-played cello glutting itself on a surfeit of minor chords. And as I meditated over a second glass, I thought of Budvar and then of Lost & Grounded: two totally different breweries, but both with a soul and a sensuality that links then more than divides them.
Posted by Adrian Tierney-Jones at 09:12 No comments:

The Seven Moods of Craft Beer 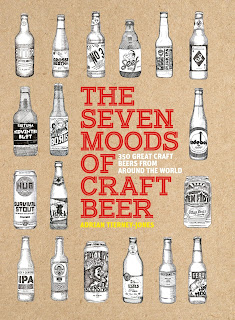 The Seven Moods of Craft Beer is my latest book and if you want to be snarky yes it’s a list book, 350 beers from around the world, about which I have written and I suppose recommended the reader try before he or she stumbles off this mortal coil. You can look at it that way and if so please be my guest.

On the other hand, what I think does make it different from what I have written before is that I have tried to approach the beers metaphysically, go beyond the whole ‘this uses Fuggles/Cascade/ME109, weighs in at 4% ABV, was developed by Cajun renegades in the East End of London in 1855, and is designed to be drank from a fluted wellington boot made of coloured glass’. There is nothing about the price of beer, what is best for its dispensation and despite the book’s title nothing about the meaning of craft beer.

The kernel of the book, the approach that I have taken, is to harbour an intention towards each beer that marks it with a mood applying to both beer and drinker. It’s about imagining the beer’s mood, giving it a personality, letting it speak to me, going off on a tangent about the beer, seeing what it really says to me, letting it expose its mood as it settles or seethes in the glass. It’s about beer having a character, a personality, which I have tried to reflect through the mirror of my words. Usually in about 100 words.

You want a beer to have a social mood, to be as chatty as a mynah bird, as sociable as your best mate who’s just got paid, then beers such as De Prael’s IPA or Douglas’ 942 will be ideal; these are garrulous, chatty, flighty beers, frisky in their playfulness, sincere in the way they sway in the glass, words tumbling out like acrobats in a French farce from the 1930s.

On the other hand, if you want a beer with a bucolic feel, a mood that reflects your inner rurality, that makes you think of a lonely farmhouse in the middle of Wallonia where saison has been made for countless generations (you might even find a bucolic beer that does that even when it has been brewed in San Diego to a soundtrack of car horns and the frenetic pace of city life), then there is the incomparable Saison Dupont, but also Modern Times’ Lomaland.

This is about beer being flexible, about being a friend, about beer gelling with how the drinker feels, about beer surprising and leading the drinker to surmise how little they knew about the beer in the hand.

And the other moods? There are poetic beers, adventurous beers, gastronomic beers, imaginative beers and contemplative beers, all of which will reveal themselves to you whenever you are in a mood for a beer.


I’m signing copies this week at GBBF at 6pm on Wednesday, so if you are around come and hear me rattle on more about moods (and of course buy a book), or on Thursday as part of London Beer City I’m at the Mermaid in Clapton where I’ll be celebrating the moods of London craft beer in the company of a few yarns on my beer travels in the last few years. You can get tickets here or turn up on the night and get them from the pub. I promise to be in a good mood.

Posted by Adrian Tierney-Jones at 11:43 No comments: