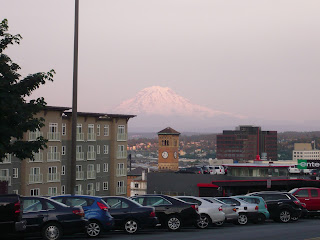 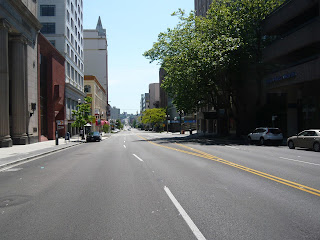 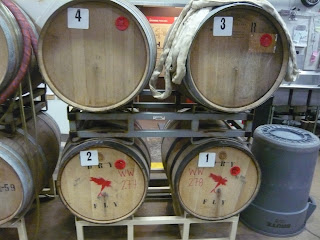 Next morning I left Tacoma, Mount Rainer looming over the highway. One question had been answered. Tacoma beer city? Yes.
Posted by Adrian Tierney-Jones at 11:57 2 comments:

Soaring. That was the moment I knew I’d nailed the talk. Using the word soaring. The beer that I loved sent my spirit soaring, handed me a warm feeling, made me think of childhood, of a river bank on which as a child I had sat watching the glassy-eyed flow of the water, of a particular lunch that had explained French food to me during a break between working on a magazine in Paris, of a glinting glass of amber coloured beer primed to refresh the palate, of a moment associated with a happy time that made me feel warm and wrapped up in a forever feel. Soaring. And then I moved on, Swanned on, ‘the hops in this beer are’.
Posted by Adrian Tierney-Jones at 08:30 1 comment:

The evaluation of beer

First of all, the most immediate aspect of a beer is the colour, it is what it looks like in the glass, it is the baby who sees its mother for the first time on opening its eyes after emerging from the warm viscosity of the womb (but does the baby see and sense the relationship with the mother or even father, is it the novelty rather than the colour, the look of things, which leads us back to colour); is it the former virgin who realises that what he or she has just accomplished and experienced is on a par with feeling like a god (or does she or he feel good about themselves, replenished with a confidence that they never felt before); it is every new experience that has ever existed — and as for the colour it could be straw yellow, burnished gold, bruised gold, dark gold, amber, torn amber, dark amber, chestnut brown, Nescafe brown or perhaps it’s akin to the darkest night that has ever been, the caves of Moria, through which the ghosts and the phantoms of the dwarves still roam and the need for a glass of beer to calm the nerves and steady the imagination is still concurrent.

The colour of a beer is the first thing the senses detect, the first thing that is seen, that is witnessed and from this all too often flows the judgment of what the beer is — light gold is weak, dark is strong, but a mild is weak while a Hellerbock is strong and then the world is turned upside down and monsters roam the earth and cups and saucers rattle like skeletons that have been told their time is up. The world tumbled upside down.

Then we have the aroma but let’s be honest the aroma taking on the mantle of the next stage of beer evaluation is a rather tenuous conclusion — some beers have a stronger aroma than others. In the right circumstances it can be a crucial crucifixion of the character of the beer, a nailing down of its reason for existence. An IPA made with an excess of American hops will leap out of the glass, like a whirl of smoke, while an imperial stout, having spent time locked up in a joyous prison of wood, will send out signals of smoke, coffee, Brett, chocolate, cherries, aged wood and whatever spirit kept itself in the barrel prior to the entry of the beer. On the other hand, a mild’s nuttiness will be shy and hidden away in the corner, the recalcitrant child, the quiet teenager, and the softly spoken uncle that you rarely see. The aroma is important, the aroma is potent, and the aroma is the next stage in the journey of the beer.

However, it is the taste and the effect of the beer on the palate that is the most visible, most vocal, most vociferous, most identifiable particle of a beer — we taste and then we take ourselves back to some imagined golden age of Arcadia, looking for signposts that point to something that we had forgotten, to a comfortable bed that we once awoke in and broke into tears because it was so homely, so forgiving, so ‘is it really time for me to go?’. The full-bodied nature of a stout, the roastiness, the darkness, or is it the creaminess, or maybe the bitterness and the fruitiness and the herbiness and the dryness and the baked bananas, and the softness and the saltiness, and the spiciness and the unctuousness of it all. The sourness and the wheatiness and the lightness and the sprightliness and the pungent and the hunger for the overpowering urge of a flavour to lay down the law and say that it is the law.

Or is it the carbonation, the long walk towards refreshment, the short stalk, the fountain that bursts the air, the bubbles that fart and fidget on the tongue, the brisk and brusque scrub of bubbles that cleans the tongue for another draught? Then could we be forgiving towards the finish, the dryness and the fruitiness and the sometimes total emptiness of a finish that will leave you in an abyss that suggests another sip of this beer won’t be that beneficial after all. Or the finish of a beer, bitter perhaps, and don’t be afraid of the bitterness in a beer, it is your friend, the bitterness lasting, lingering, clanging, clinging, singing its way.


This is then the beer that will be in your glass and then in your mouth and then tippling down your throat, its constituent parts all playing a role in a play that has been going on since the first time a human drank something he’d made by accident and called it ‘beer’.
Posted by Adrian Tierney-Jones at 08:30 No comments: