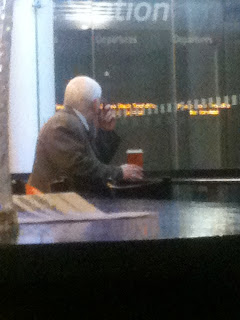 Elland’s 1872 Porter becomes top dog in the Great British Beer Festival and I note shreds of predictable behaviour rag and rash their way through social media. There were no bomb hop amidst the winners while trills of old man’s beer comb their way down the wires; elsewhere I read we’re cooler than you schoolyard taunts and the fact that third placed Jarl at least has some hops is a poor consolation.

I wonder why some people feel disappointed?

This is CAMRA’s show and dismayed as I am that there’s no Kernel, Camden or Magic Rock on show (as predictable as the signs of craftites’ tedium at the winner) and that the American cans on display cannot — apparently — be sold, this is their show and they can do what they like.

I judged on Tuesday morning and out of the five beers I received I am pretty sure I got Elland and it was brilliant — my first thought was how Lowestoft, in that I took in the sort of smoky hints on the nose that wouldn’t be out of place in a box that had once held smoked herrings; then there was plenty of chocolate (milk), coffee (mocha), vanilla and raisins as well as an all enveloping darkness that put me in mind of that hour before the first silvers of dawn start to appear in between gaps in the curtains. I think this was our table’s winner.

I also had a best bitter, which — having being unimpressed down the years when judging this category — surprised and delighted me with its sprightly condition, lychee-like notes on the nose and a fan-dance of tropical fruit (without being too overwhelming) on the palate.

Meanwhile once down in the hall, I got in line with the likes of oak-smoked Schlenkerla Rauch, Sierra Nevada Hoptimum, Matuska Raptor, De Molen Rye IPA, St Arnold Amarillo Hefe, Greene King 5X, Boulevard Tank 7 and, er, on the recommendation of a fellow writer, Barnsley Bitter. Even though I love well-hopped beers (judging in Rimini earlier this year I fell in love with several Italian DIPAs) I don’t just want hop bombs, that’s like those big fat men who always insist on having the hottest curries.


Following on from my post about smugness, there does seem to be this element of spite and childishness developing within some sectors of the craft beer ‘movement’, which ironically enough is a natural mirror to the Colonel Bogey, green ink letter writers to What’s Brewing who treat cask beer (though they call it real ale) like a holy relic. Both sides are exceedingly irritating and increasingly foam-flecked — or as Orwell put it: ‘The creatures outside looked from pig to man, and from man to pig, and from pig to man again; but already it was impossible to say which was which’.

Oh well, wish I were going to the London Craft Beer Festival this weekend.
Posted by Adrian Tierney-Jones at 08:24 4 comments:

Currently enjoying Tom Acitelli’s Audacity of Hops, an occasionally breathless but incessantly fascinating gallop through the past 50 years or so of American craft beer history. I’ve just passed the mid 1990s and coming closer to the time when a major shakeout in breweries was on the horizon and then I notice an excellent article in Draft by the ever lucid Joe Stange. There’s an interesting coda to the debate from Lew Bryson here. It’s all very enthralling.

And of course this all poses the question: could it happen here? There are lots of breweries and I personally don’t always feel confident when I go into a pub and are faced with a row of hand pumps or keg taps for breweries I’ve never heard of. Is this still about pub quality? I’ve had flaccid cask beers and sterile, still craft keg, which I am sure could have been sorted out in the pub, but then I’ve also had dull, unimaginative beers that were surely brewed by committee.

However, does this mean that I should be actively calling for a shake-out? That I should be hollering for the closure of breweries up and down the land? I don’t think so. A certain amount of these new start-ups represent someone’s dream, while others are the cold calculation that this brewing lark can make money in the short term. Who am I to say that someone should lose their business, whether I agree with the ethics or not? I would never want anyone’s brewing business to fail, no matter how bad the beer is, I think the lack of quality would do for this hypothetical bad brewery — the market, as is the case about the argument with lads mags that was so succinctly argued in the Guardian here, will sort things out. If a beer is bad, you don’t drink it. I wonder if there is an element of mean-spiritedness, elitism and sheer arrogance in wanting breweries to fail? The flip side of craft beer is perhaps smugness?
Posted by Adrian Tierney-Jones at 08:29 13 comments:

This morning on the radio there’s a guy talking about a prom taking place at the Wigmore Hall — as I only caught a fragment I’m not sure whether it was tonight  — and he says that people are put off by the term classical music but when they hear something like Beethoven’s Pastoral Symphony then they realise that they love it (mind you this mythical cast of mind called people doesn’t seem to have an issue with the word classic when it’s applied to classic rock, so maybe what I was listening to was another one of those types that like to dismantle structures that have existed for centuries, employ an advertising company to come up with another name and then discover that people liked the original name in the beginning). I wonder what he wanted to replace classical with? Music?

However, it then led me to think about beer: now and again I am told that people are put off by the word beer, but they actually like it when it’s tasted. Beer is too blokey, too plebby, too commonplace, too wet, too bitter, too dark, too unlike wine. Beer is not just fit for purpose. If that’s true then why doesn’t the brewing industry hire a PR company to come up with a different name and I’m sure that beer (or whatever it’s called — how about bine?) will rise to the highest of heights and such delights as jousting between the champions of cask and craft will be essential viewing throughout the land. The challenge is there.
Posted by Adrian Tierney-Jones at 16:35 4 comments: