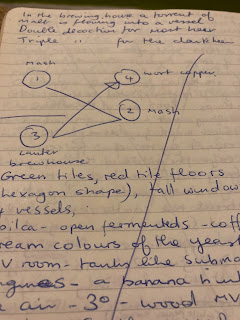 Just write, gather and then scatter the words, like throwing seeds about on a field during the act of ploughing, a virtuous Piers-like act that is labour, monotony and in common with the circular practice of prayer. Words thrown up into the air, confetti at a wedding, the snowfall of language, the joyous act of writing, the bonds that link all the acts of writing — the grammatical glue, the clauses and cases, the nouns, verbs, adverbs and that most precious of all things — takes a deep breath — the adjective, the describing word as we were taught in school.

Let the words land, let them join together, let them form meaning, let the sentences you write be the strongest sentences you ever wrote. Be thoughtful and don’t be caught by sensation, the need to scream and shout and let it all out (there is a time and place for that after all). The discipline must overtake the din that an over-expressive voice can often cause and silence the doubts that writing can often rise, like the dead from the grave (for you never thought that writing might bring out something within your subconsciousness that you didn’t really want to experience again but this is the risk in writing, the more you tap away at the keys, the deeper you dredge into your thoughts, and then there is more of chance that you could discover something that haunts and taunts you as you go about your day to day business). The parable, the story that makes sense and gives you strength, is that of the writer who calmly and considerately sits down every day and makes a journey into the deepness of the mind. They do not write drunk, whatever some might say.

On beer writing: Describe something, a taste, an aroma, an experience, a finish at the back of the mouth or the start of the throat if you will, a person even. Is it fulsome, spindly, avuncular, like a merry monk of myth and legend; is it bawdy, haughty, a cavorting of flavour and favour, joyous and unbridled or brooding and melancholy like a general before a battle who knows it will be lost but continues to smile weakly at the soldiers with the conviction of a saint? Could it be perky and cheeky, and the kind of beer that laughs with a fullness of pleasure as it slips down the throat, or could it be the roaring engine of a Mustang bemused but still full of power as it somehow finds itself in a small street, its engine trembling with a sense of anticipation as it waits for the open road, the roar like the rush of waves during an autumn storm. Let us then think of the many ways we can write about beer and brace ourselves for the surge and the urge of expectation that a good beer often brings; for a writer who wants to really wave their wand and cast a spell must be prepared to smile and dance and chance everything to write the strongest sentences they must ever find within that rag-bag of thoughts and penances and clemency we call the mind.

Posted by Adrian Tierney-Jones at 08:48

Email ThisBlogThis!Share to TwitterShare to FacebookShare to Pinterest
Labels: beer musing, on beer writing, on writing