And so I tried several of the Marston’s revivalist beers over the weekend, which the postman had struggled up the path with: I enjoyed the Dark IPA and the Steam Beer, though my brow furrowed at the Saison, which I thought miles away from what I recognise a saison to be; it was lacking in austerity and flintiness and felt fat and ale-like on the palate. There was some boiled lemon sweetness but it confirmed the view that I had felt when first drinking it at Craft Beer Rising: it wasn’t a saison, even though the right yeast was used. It was drinkable but if you are going to call something a saison I would expect it to have some of its characteristics. Hey ho. Several months before, I had also tried the Greene King speciality beers with which the postman had struggled up the path and enjoyed a couple and felt let down by the rest. But at least they’re trying I thought.

However, the other thing that the beers propelled into the forefront of my thoughts was a memory of InBev’s Artois Bock, which perhaps one could say was one of the first attempts by a massive brewery to go all craft. Released in 2005 after much tasting and contemplation by the likes of Michael Jackson and Mark Dorber, it had, according to a piece I wrote in the Morning Advertiser at the time, ‘a smart stainless steel font and bespoke glassware, while quirky ads told the trade of this new arrival in what was called the “Artois family”’. No mention of the taste then.

One of my main memories of it was that in 2005 I was in my first year as secretary of the British Guild of Beer Writers and one of our major awards was sponsored by Artois Bock and InBev, which didn’t go down well with some members (InBev had announced the closure of the Hoegaarden brewery at the time). It was served at the Guild’s awards and dinner (and untouched by some) along with caramelized boneless quail with grapes, shallots and a Fuller’s Honey Gold reduction, accompanied by sweet and sour endive; meanwhile a wine writer won the eponymous award. The Artois family was then joined by something called Peeterman, an ethereal (read bland) light beer and then the ‘oak-aged’ lager Eiken Artois — all went the way of the ark in 2008.

I suppose it was all an attempt to give the brewers of Stella a bit of an upmarket cache, but as soon as I saw bottles of the Bock knocked down to £1 in the supermarkets I guessed the beer’s days were numbered — the beer was ok, but I seem to recall being underwhelmed by its character, disappointed, especially as the tasting notes on a chalkboard in the White Horse seemed to bear little relationship to what was in my glass (I blamed myself). Meanwhile, Peeterman was incredibly watery and I never even bothered to try Eiken.

I hope that the larger breweries continue to produce their niche beers, if only to demonstrate that their brewers can make good beers beyond the ones they make day in and day out (I also hope that they can perform that great mythical dance of being a ‘gateway beer’). However, if you see the bottles discounted in the supermarket then remember Artois Bock, the beery Nineveh of its day.

Posted by Adrian Tierney-Jones at 08:57 9 comments:

The sign makes me smile. It’s outside a pub on the road to Exeter, a pub that is primed and cocked for the Easter weekend. As we drive past I see the sign that makes me smile. ‘Something for the kiddies, Good Friday Easter egg hunt, 3pm, SHARP!’ So what makes me smile? The use of the word kiddies seems archaic, as if the person who wrote it wasn’t used to dealing with kids; it makes me wonder if this Easter egg hunt for the kiddies is something that has been put on under pressure perhaps, from an area manager, brewery rep or partner. And then the exclamatory use of ‘SHARP!’ — now that really made me smile. If dealing with kids you’d expect a free and easy manner, but this suggests something closer to a sergeant-major ordering reluctant recruits about, getting them to do something on the double. And this sign makes me then think about the language that publicans and brewers and their PR people use — sometimes it feels as if a Thesaurus has been dredged with a deep sea net and all manner of words have been brought to the surface, some of them lying there, flapping about and gasping for breath. Things are, of course, awesome; let’s smash it (what? a window, a tea cup?); it’s all been brought to the customer with passion (what with blood, sweat and tears? sounds a bit unhygienic to me); and naturally everyone is ready to rock. And back in that pub this afternoon the kiddies will be expected to turn up sharp at 3pm and look for their Easter eggs. Woe betide any that turn up late.
Posted by Adrian Tierney-Jones at 11:38 No comments:

Drinking in the open air

Back in 1998 I was a columnist in GQ on the joys of living in the countryside, which was more Withnail than a man standing in a hedge with a pair of bins in his hand. This was my first one, which was all about the joys of getting drunk in the open air — note the mention of Old Freddy Walker, which was one of my favourite tipples then (and the old bloke after whom the beer was named was still alive then). I went onto write about sex in the countryside, selling cider to hippies going to Glastonbury and shooting at (but not hitting) wild ducks. It was great fun and I even got commissioned by then editor James Brown to write 3000 words on West Country cider, which set me off writing about cider for about 12 years until I got bored with it (that makes me feel like the man who turned down the Beatles). Anyway I thought it would be fun to put the column up as this was all done when magazines were strictly binary (or whatever the word is). 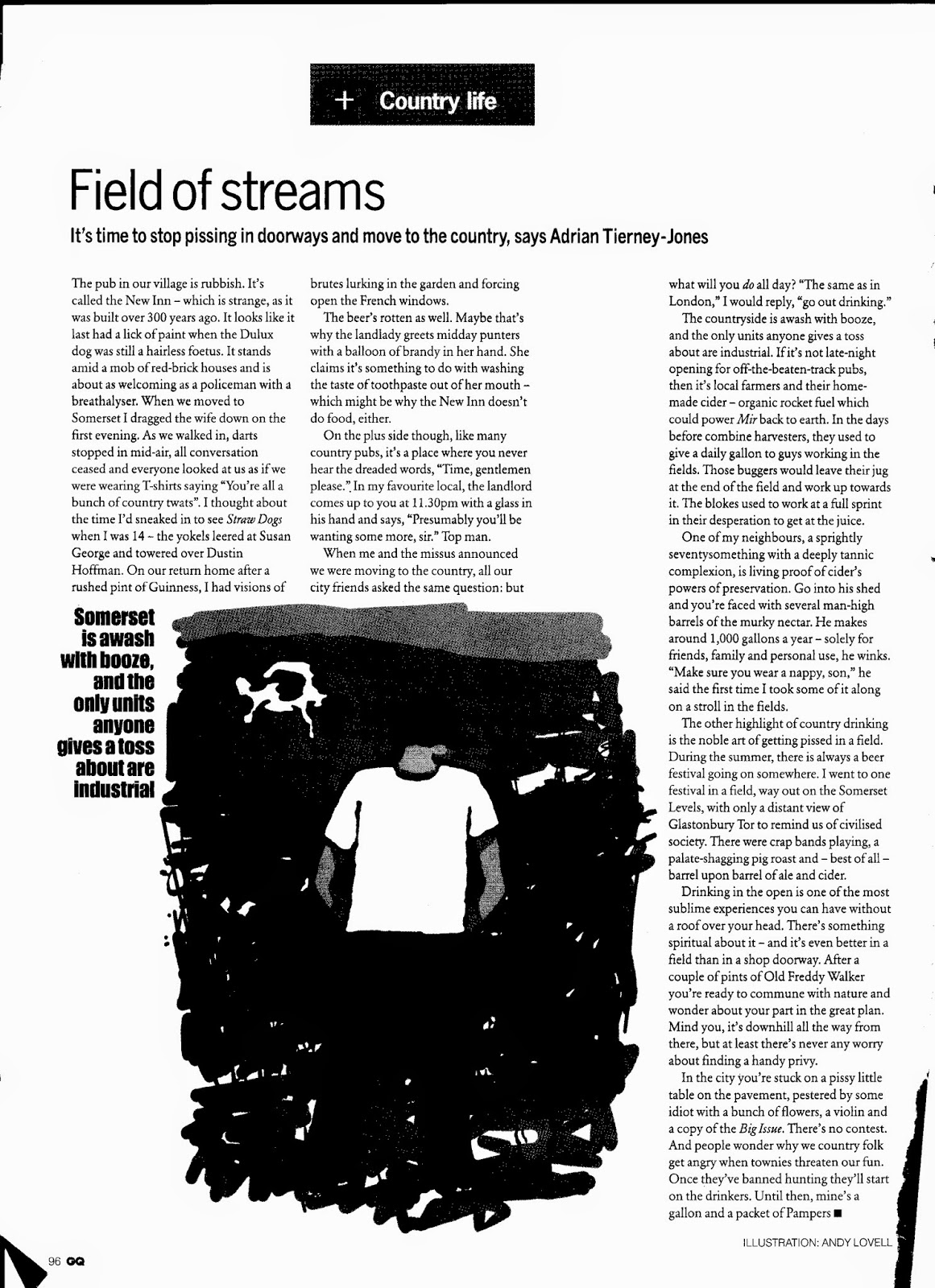 Posted by Adrian Tierney-Jones at 12:36 2 comments: 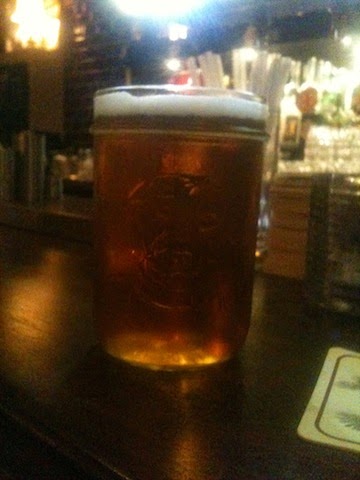 When I was a kid my brother and I had a guinea pig that we called Reginald (to be honest it might as well have been Regina, we had no idea what gender it was). Its hutch was in a greenhouse and during the winter I would fill a jam jar with hot water, wrap it in a bit of old blanket and hope that it would work as a sort of hot water bottle to keep him warm. It seemed to work as Reg survived this particularly cold winter but it does feel a bit daft when I look back at it now.

I thought of Reg for the first time in years when enjoying a glass or two of Lagunitas IPA in the Hops and Glory in Islington. It’s an amiable and easy-going kind of pub, named after a certain book that anyone with any interest in beer should read and majoring in (let’s not beat around the bush) craft beers. So there I was with my first pint of Lagunitas’ IPA and decided that I needed another to get to the heart of what the beer was all about. Another please, the bar man nodded, would I like it one of Lagunitas’ branded ‘jam jars’. He showed me it and yes it looked like a jam jar. Does it hold a pint I asked? It did. I’ve drank from some curious glasses (if I order a glass of Kwak in my local there are always people who have never seen the test-tube-in-a-wooden-bracket glass before and it seems to cause a minor sensation but then we live in the countryside and we still turn out in droves to watch the air ambulance land on the football field) and once at Boston airport I rather enjoyed a glass of Sam Adams from that peculiar glass that the brewery developed with the aim of enhancing the flavour and aroma of the beer (I thought it worked even though the glass’s shape reminded me of that bloke’s face in The Scream).


Back to the jam jar. As I write I’m still trying to work out my feelings about it — yes it was simple and utilitarian, easy to hold, and the perfect alternative to the handled dimpled hipster’s choice mug (the sort of glass you’d imagine Ukip members drink from), but I’m still not sure whether it’s a bit of a gimmick. What does it say about the beer in the glass? That it’s ordinary and down-to-earth? That nobody really cares how it’s served. That it’s quirky (as in Timmy Mallet rather than Dali)? On the other hand why shouldn’t an IPA become as John Doe as PBR or Bud? It’s a lovely beer, being spicy, peppery, hoppy, fruity, dry and bitter over several layers, a beer that given time I would have studied for the rest of the evening. Yet, the jam jar haunts me, I wonder why?
Posted by Adrian Tierney-Jones at 14:30 9 comments:

Sometimes what breweries want and what beer writers do go off in different directions (and long may it continue): here are some photos of a press trip I took to Zywiec Brewery several years ago. The brewery wanted to show off its brand new plant and — as this was the time when Polish beer was becoming ubiquitous in pubs and the off-trade — its premium lager, an inoffensive drink that was ok in a tight spot. However, as soon as we were taken to the rundown Brackie brewery on the Czech-Polish border, where the wonderful Zywiec Porter was produced, that was all we could think about. There was a brewery cat, a magnificent pale lager, lager tanks burrowed into the side of the hillside, a three-month brewing, fermenting and conditioning cycle for the Porter and, of course, the rich, muscular, brawny, tenebrous nature of the beer itself. That was it — when we got back to the UK we had our features to write, all of which focused on the porter and its brewery, though the sparkling new Las Vegas of a lager plant did get its due mentions (we were a polite crowd). I don’t think any of us have been back and I do wish that the Porter was available over here, but on the other hand going over to Krakow and trying to track it down and drink it served on draught in a small side-street bar is more fun I would have thought.


Posted by Adrian Tierney-Jones at 09:04 No comments: