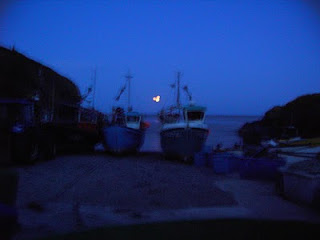 Loud music and a couple of drunk guys on the next table profess their love for each other while their girlfriends look on with fixed smiles. The tune changes: ‘we are Everton,’ they bawl in unison, sucking on their bottles of Budweiser like babies on an ungodly teat. The thump of music loud, unnecessarily so, in the background, while I order a pint of Marston’s Pedigree (rather good, spicy, peppery, nutty, Golden Crunch says my mate, dry and bitter, the best glass of Pedigree I have had for years) and outside there are a couple of bouncers standing around as the crocodile of Sunday night seaside drinkers crawl up past the pub and the still silent kebab house next door (Zak’s Kebabs, if you want to know). From another table, where once smoke used to drift over from a multitude of fags (this gaff was a real smokers’ joint in the past), now fragments of words slip by (‘he’s as common as hell’ someone says to someone else while someone else growls in agreement). Let’s move on, to another pub, leaving the lovers of Everton and each other to themselves.
There’s an old Threlfalls brewery window at the front of our next place, a view down the street towards the promenade and the Victorian pier, while inside it’s cold light, plenty of old pictures of the town on the wall and a fella playing ragtime on a piano in a corner. There’s a man at the bar with a modernist Teddy boy quiff (not as brutal as the ones I recall being worn by the Fenland Teds who used to chase me from Cambridge bus station in 77), brothel creepers and a smart drape; the first time I’ve seen this style on anyone for an eon. A couple of kids watch the pianist, while a punchy young lad at the bar debates Fosters over Kronenborg. ‘There are no chemicals in this one,’ says the barman pointing at K and his customer agrees, ‘I can drink 10 pints of it and still hold my own in a scrap, while with the other one, six pints and I’m gone’. Pedigree once more for me and my mate, who lives in the town when he’s not in Brussels, the sulphury, bath salt Burton snatch reviving the nose, while it’s creamy, bitter and spicy in the mouth; two times in a night, two decent glasses of Pedigree, I’m a lucky man. I like the atmosphere in this pub, the chatter, the incidental noise, the sense of this-is-what–we–do–for–our–nights–out that is etched on people’s faces and undercuts their conversation; what most people drink is by the by (I note a middle aged man pointing at the Hobgoblin, ‘another’, why waste words, a beer as ordered by Beckett).
Earlier on my mate had insisted we visit an old town pub, wooden floors, empty now that the footie had finished, a lone brace of topers at each end of the bar, and Draught Bass, which neither of us like so off we went. That which sticks in my mind is the disheveled soak at the northern end of the bar whistling for the barman on our all too brief entrance (obviously a regular). We tried the GK north and south dispensation elsewhere and thought it so-so, while found the pub that we used to visit for Draught Bass when we liked it back in the 1980s closed for refurbishment, I hope that meant what it meant, not a shifty way of saying ‘we’re shut for good’ — this place used to have a small roped off area where the local lifeboat men sat.
And finally to a Lees pub, opposite a housing estate that buried a town farm and a golf links back in the 1970s — I used to really despair at my inability to enjoy the Bitter, but now I seek it out when back, revelling in the creamy, slightly sweet, gentle mouth feel and while we contemplate there’s a drunk at the bar insisting that he buy the Hungarian barmaid a drink. She smiles and politely continues working while matey (not a vicious drunk, or a falling down one, but just drunk and in love with someone in a way that eight pints can only encourage — many of us have been there, for me it was a redhead in Wetherspoons in late 1980s Finsbury Park), continues with his wooing: ‘letmebuyyouadrink letmebuyyouadrink letmebuyyouadrink.’ Will he feel the same in the morning?
Posted by Adrian Tierney-Jones at 17:31