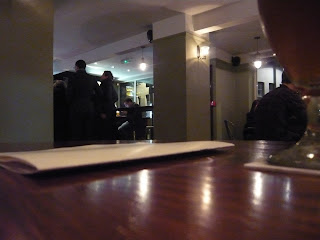 Indie rock fans on the Veltins. Young guys with wispy beards, trying to stare like Eric Cantona, a look that says ‘I’ve got a glass of IPA is Dead and I’m going to drink it’. Student girl at the bar laughs when she says to no one in particular how good her glass of My Antonia is. At the back of the room, there’s a table with four blokes, after work beer men, dedication writ loud in their disdain for fashion, pint of whatever he’s having. Moravka for me mate. Look around: there are lads in here wearing the sort of blue, white-edged windcheaters that normally blend in with white pumps, flicking through the beer menu, oohing and aahing and ordering Infrareds all round. Meanwhile, in this space in which the architecture is of a hip and happening bar — smartly sanded floorboards, reclaimed perhaps, soft light on the cusp of going harsh, austere seats and tables, the very shock of the post-modernist new, two floors — I’ve joined the Eric Cantona stare-alikes with a glass of BrewDog’s IPA is Dead, Sorachi edition, which I don’t care for that much (and I’m probably alone): soft pungent hop, bitter shrieks of a banshee in an old Irish country house at the back of the throat, unbalanced, reminiscent of old footage I once saw of an experimental wartime tank with too large an engine that landed on its side. German I think it was. Still, you have to try this things and I guess I’m alone in my disinclination to order another glass. If I shut my eyes I think I’m in some new craft bar in the US or even Belgium (minus food of course), but I’m in Manchester, at the Port Street Beer House, which fortuitously was only a couple of doors away from where I was staying that night.
Marble Arch, a wonderful place, was where I’d earlier dined on battered poached egg and Marble Chocolate (in a glass). I do love that place with its touches of Victorian/Edwardian high drama especially something that I never noticed before: a couple of old pics of a starchy middle aged couple, he perhaps a university big wig and she just happy to bask in his shadow; next door to her, a black and white etching from the 1950s of a flat capped bloke with pint in hand. Is this a deliberate placing? The democracy of the pub in action? Then there’s the joy of people watching with Pint in hand: a couple of students on a date, she almost embarrassed to be ordering beer; at the bar two sporty blokes, one a newcomer to the bar who asks have you got anything like Tetley, while a postman taking a break from the nearby exchange curses the moment he spilt beer on his trews.
But back to Port Street, it’s new and smells new, is almost self-consciously new, and ironically enough — after Cask, the Rake, Euston Tap etc — it’s not the shock of the new, it’s just new. And I like this newness, and then I wonder maybe this is part of a new wave that won’t be permanent. Further furrowing of the brow: is this a problem?
With our pubs we want a continuity, an ossification even, because the majority are linked to their communities and their communities have been there for centuries in one way or another — we want our local to have some link with those who have been before even if the place was a dive before it was jazzed up (it’s like a pub that spent 20 years on the scrap heap: you conveniently forget that and hark back to how it might have been on VE night or when Queen Victoria died, even though it was perhaps crap then as well). Something like Port Street BH works in a city, where there are fewer roots and links and life is fast flowing, especially places with plenty of students coming and going. Port Street BH has no sense of history; you do not walk into it and admire the friezes or imagine what happened here on Christmas Eve 1954. On the other hand, Port Street BH is like being handed a blank sheet of paper (or even empty shop) and told to come up with a concept; it’s like writing: before the word there’s an empty space, it’s one’s duty/job/inclination/urge/desire to conquer that space and fill it with words. In that sense, the creators of Port Street BH are just like writers.
And so, what am I trying to say? I visited an ale pub with some time on its hands earlier on in the evening and found it dead boring (despite a goodly number of taps) and not the sort of place I wanted to linger, I am not going to go into the details, I am sure that there are plenty of people who like it, but it was wasted on me and reminiscent of why I avoided plenty of London pubs in the 1980s. For that reason I can only applaud Port Street BH to the hilt and urge you to live for the moment and grab a beer amid the aroma of newly sanded floorboard. 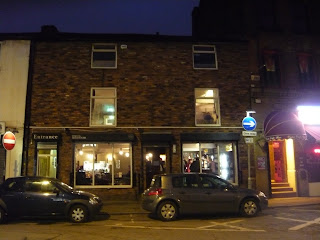 Posted by Adrian Tierney-Jones at 22:20