On a trip to Dublin, I once had a jar of stout in Davy Byrne’s, though I should have plumped for a glass of Burgundy with a Gorgonzola sandwich just like Leopold Bloom. At least the pub exists, which is more than be said for the Sailors Arms, the Bull or the Rovers Return. If they did exist, in the Sailors you would be drinking in a village of Llareggub. At the Bull you would be reminded of its late landlord Sid Perks, while the Rovers Return would see creamy ersatz pints of Newton & Ridley served. Pubs abound in the pages of literature and popular dramas, being the places where people meet and dramas occur. The Shakespearian clown Falstaff caroused with his drinking cronies in the Boar’s Head, while Mr Pickwick went to the Magpie and Stump (for a nice glass of porter perhaps?). GK Chesterton went on the move with The Flying Inn and Graham Swift’s characters met at the Coach & Horses in Last Orders. Imaginary pubs aside, you might want to create your own just as George Orwell did in his famous essay on the perfect pub, The Moon under the Water.
Or why not come to Hay-on-Wye over August bank holiday weekend where Kilvert’s Hotel will be hosting a Hay Ale and Literature Festival, at which myself and Mark Dredge will be talking — more details here. The picture is of myself, Pete Brown and Tim Hampson laying our collective egos aside and doing a collaboration tasting last year (it was cold). 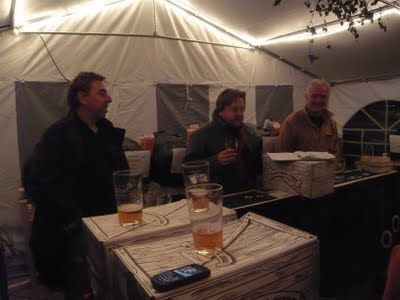 Posted by Adrian Tierney-Jones at 18:27