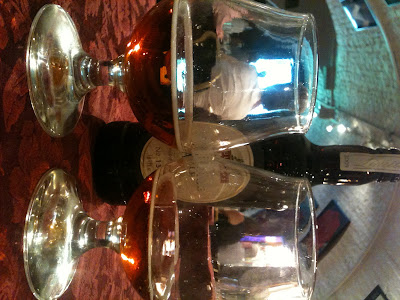 Degrade. What a fascinating word. The enemy’s forces are degraded, in other words blown up and slaughtered. We degrade ourselves or we degrade others. Degradation. But then when I’m underground at Fuller’s, in the Hock Cellar, air raid shelter chic with brick ceiling and a sense of subterranean safeness, the word is used much more positively. Beer degrades and becomes something higher in its sensibility.
The purpose of going to Fuller’s is to join in with head brewer John Keeling on a tasting of all the Vintages produced since Reg Drury kicked off the series in 1997 (Keeling’s first one designed solely by him was in 1999). This will be the last one that features them all as stocks of some (especially 1998) are being degraded.
‘When the Vintage was first produced we never expect that people would be as interested in it as they are,’ says Keeling to the assembled, ‘we certainly never thought that interest in the beer would last this long.’ But it has — time being the common theme that all the Vintages share. Time is also an ingredient in Vintage, the passing of which sees the beer degrade from the moment it goes into the bottle. Yet this is a good thing. The degradation adds something to the character of the beer — fresh is good, but degradation is also good.
The starting line was Fuller’s latest release, 2011, featuring a boozy orange nose and almost Cointreau-like in its citrusy brightness; hints of petrol (as in Riesling) also rocked up and decided to take a bow. On the palate it was flighty and then creamy and fat, showing off some pepperiness and then a dry finish. I rather enjoyed it. 2010 had a nose that reminded me of orange glaze for roast duck, while in comparison to 2011 it was much sweeter while the oranginess was more pronounced. On the palate Bakewell tart notes chattered away alongside hints of white pepper, perhaps it might work with Chicken Korma.
The tasting continued: here a hint of Drambuie and there a cherry brandy fieriness and sweetness and over in the corner some calvados — the 2007 made me think of saison with its spicy notes. 2005 was all orange marmalade on toast with raisins and Muscat as a starter. Oh look here’s dandelion and burdock on the nose of 2004, Marmite and marmalade when 2002 came along and the millennium’s expression was honey glazed almonds, ripe apricots, a creamy, peppery, fruity, zesty beer with a strict corrective finish (‘I’d pair this with woodcock,’ said former White Horse doyen Mark Dorber to my right; I thought Lancashire cheese). The final one — 1997 — had a beefy, marmalade character though the orange notes had become muted and the alcohol not as expressive. Last year I tasted the same beer and this is what I wrote: ‘Nose: malty (butter toffee), aromatic, spicy, slight hint of chocolate. Taste: delicate, spicy. Finish: silky smooth, seductive bitterness.’ I reckon this beer has a few more years in it.
And as a coda to this fascinating tasting, Keeling then went and admitted: ‘Brewers still don’t thoroughly understand the aging of beer.’ Which means that having tasting all these Vintages and found them fabulous, ringing endorsements of the desirability of aging beer, I can only surmise that brewers like Keeling are magicians and magnificent intellects, alchemists, bridging the gap between art and science. Specialists in the art of degradation.
Posted by Adrian Tierney-Jones at 06:58