Beers I have been recently sent 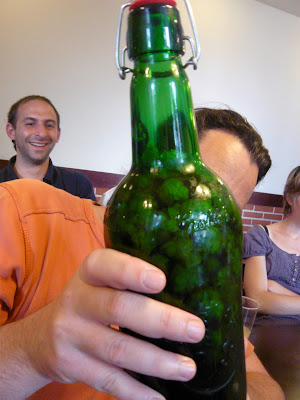 Beer, I get sent to me, for consideration, or sometimes if I can’t get to try the beer for a feature, I ask the brewery if they could send me a sample. I trust the brewery; the beer, 90% of the time, is delightful — I’m certainly not a guy who likes every beer. But the result of this is that I have a swathe of tasting notes that I feel I should share, they’re not all in features or books and sometimes they’re so good or intriguing that I would like to share them, hence this post. So bear with me on this.
Sharp’s Honey Spiced IPA, 7.5%
Dark gold in colour; on the nose a ripe peach skin that has been sitting in the sun for too long; it reminds me of some of the erotic charge that the hop sack brings; there’s also a hint of the snappiness of green apple plus the soft sensual felt-like texture of honey. On the palate there’s honeyed peach skin, a softness of fruitiness (papaya, some lychee and orange skin where the thumb has made the spray come out) and a floral honeyed note that makes me think of honey slathered on fresh white bread — a breakfast beer then. It’s a ripe and voluptuous beer, expressive, yearning, a minor key in a chorus, but then the finish adds a sense of bitter betrayal, crisp, dry, chewy before the fruit and honey returns to take a more mellow bow.
BrewDog Avery Brown Dredge, 7.5%
Scrounged a couple of bottles of this from Zak Avery. The nose was sherbet–like (it reminds me of a fascination I have always had with the Arabian sherbet, a soft drink I suspect I would enjoy) with a spray of grapefruit pith; sweet lemon without sweetness. It’s a big beer when taken from the glass — dry lemon, dusty grapefruit, a lack in sweetness, almost medicinal, an expression of the Saaz — it also made me wonder about imperial Pilsner, whether they are experiments or gimmicks or an organic expansion of the genre (see a comment from Doug Odell about his sour Pilsner here). There’s a big lemon sourness that is different from the flinty lemon sourness you would get in a saison. I was not entirely sure about the beer — I don’t know that the use of shedloads of Saaz works. Maybe an imperial Pilsner is an angel with a dirty face.
Fordham Copperhead. 5.2%
Don’t know much about these guys, they’re trying to establish themselves in the UK, and in my limited knowledge of where they are — Delaware — I assume that the Alt style of this beer is quite a common thing (vague memories of 1001 Beers’ beers from this part of the world intrude). Unlike Cyrano the nose is not big but there is a spicy pepperiness on the palate, plus a hint of green apple, some crisp ryebread, and the feel of an oily texture. For me this is a typical American interpretation of an Altbier though I think Otter Creek’s is one of the best (that is called Copper Ale, who got there first I wonder?). There is a dry, crisp, cereal-like chewy finish. It’s both chewy and refreshing, sweetish but also with a hint of white pepper; fruit pastilles perhaps in the background; digestive biscuit with a dusting of chocolate. There is also a traditional American hop — which delivers some grapefruit notes. I like this one a lot. Toffee notes came along cap in hand as it warmed up.
Windsor & Eton Republika, 4.8%
First thoughts: this beer owes more to Bavaria than Bohemia, with its snappy bitterness and lacking that voluptuousness that I would expect from a 12˚ Svetly Lezak — a crisp bitter lemon-tinged carbonation but again that high bitter note. It tingles away on the palate, rings away, like a tram clanging its way through some central European city. The carbonation offers a delightful bite of refreshment, a gorgeously crisp and appetizingly bitter mouthfeel that I want to experience more of — I had mine with freshly made spring rolls where the carbonation briefly swabbed the decks of the palate clean allowing the refreshment of the beer to emerge, five spice powder and chilli and all, before the spring rolls asserted their spiciness. It cut through the grease, faced up to the spice, but allowed the spice to have its own moment in the spotlight (I don’t want the chilli to vanish, I wanted chilli to have its own identity, but I didn’t want my mouth to become a gastronomic battle of Stalingrad). On its own, a superb riff on a Bavarian but also a cool fit with a vegetable spring and chilli.
Posted by Adrian Tierney-Jones at 09:00