Are you afraid of Lager? 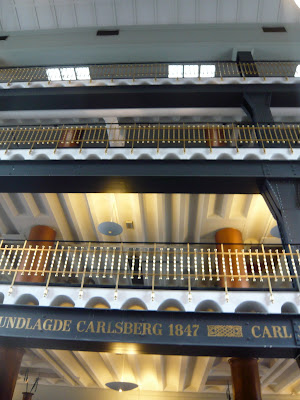 Are you afraid of lager? If not then you should be. It’s the beer that the ravening hordes of British louts are said to consume en route to football matches, congregating in herds, howling and hooting, gathering in the crepuscular gloom of their own failings outside the White Star or the Dog and Duck or whatever mock rural name where they gather goes by, allowing their ravenous jaws to wrap around gobfuls of dubious flesh inserted into anal fissures of damp cotton-wool cheeks of near-bread, tooling themselves up like modern Visigoths ready to attack the mightiness of the Roman Empire (and then they discover that they only have to kick the door in and the whole rotten edifice comes crashing down).
Are you afraid of lager? It’s the beer that your mother (provided you have a mother) warned you against when you starting hanging out with your mates, passing the cans around at the building site that also doubles up as a municipal playground and keeping an eye out for the occasional passage of police cars; it is the beer that was once blamed for British youths growing an extra horn and starting to miss school and sign on for the benefits that allegedly come from spending a life on benefits (once it was cider that took the bullet and then it was alco-pops and then it was skunk and then it was cider once again); it’s the beer that the majority of the population drinks and has drunk since the late 1980s when lager overtook ale as the beer of the British; it’s the beer that you can ask for wherever you are in the world and you will get something roughly the same colour (the colour of wealth, the colour of fidelity, the colour that did for Midas), it is something that roughly tastes the same beside an Italian swimming pool or in a Mexican airport or in an English curry house. It is Satan drenched in urine, a failed comedian with a red nose, the barrack room buggery from another age — it is lager.
Lager: it is Princip firing a pistol at the Archduke Ferdinand and starting a war, it is the beer that makes the most mild mannered of ale men angry at what they would call ‘fizzy yellow piss’; lager: it is, just, lager. Lager, you might sigh and think and say to yourself that I only drink the classy stuff, that the glass of golden sparkle in your hand is an aspirational drink, something that reminds you of foreign holidays, days in the sun, the missus in a bikini. Are you afraid of lager?
Posted by Adrian Tierney-Jones at 17:14