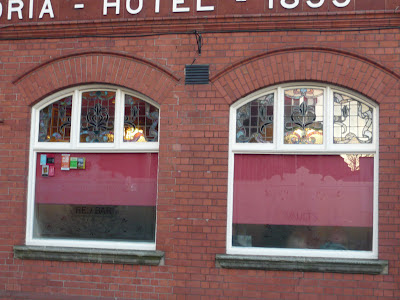 Eve and Aaron are sitting down, then standing up, then sitting down, sitting down, half a crown, around the big fat wooden barrel that serves as a table at which you sit, at which they sit, at which I sometimes sit, while their small terrier Jack mulls about in front of the fire, the fire we sit love, the fire we still need, one eye on the water bowl, recently filled once again by the barman Jim, the barman Jim who doesn’t come from here but from there, and has made himself both friend and foe to those who come and drink in this pub.

Then the door to the pub opens, a bell of the back of the door rings, and locals look towards the door, to see who is icumen in, whether it’s a local who is looking to pass the time of evening or someone who’s heard of the reputation of this pub and wants to order a meal or drink a glass of beer that was brewed somewhere in the neighbourhood or the manor or the locale or whatever you want to measure space with. Sometimes it’s a lost soul who has glimpsed the light that shines itself on the sign of the bar and looked in through the windows and liked what he saw — yes the unexpected visitor is always a man.

And at the bar, the oak hewn, oak walls of England bar, a sort of wooden cage that allows Jim to come and go and think of Michelangelo or whoever his favourite painter is, Chaz and Challenger enjoy the first pint of the day, while exchanging the sorts of words that James Joyce usually noted down in his pocket book (though the mere act of jotting down the words of men handing out words like sandwiches at a funeral was perhaps enough for him). ‘The day.’ ‘Yeah.’ ‘Thought you were out later than normal.’ ‘No.’ ‘He died the other day, found his body in the bath, just like Whitney Houston.’ ‘Except he was white and a man, unless there is something we should know.’ Silence pushes itself with the nerve of a queue jumper between the two sparring partners for a while. No rhyme or reason in the words exchanged, but then after all this is the pub, the British (or should that be English, for after all I am in England, now, here and I suspect forever) pub, whose provenance and providence echoes down the centuries.

There is Gareth at the table, on his own, as he is most nights of the year, unless someone wants to suffer the slings and arrows of his outrageous fortune, night after night, in the darkness of his soul, where only the glass of Guinness, as dark as the night through which his soul suffers day after day, helps to calm matters down and make him feel as if he belongs to the men and women who drink in and out of the pub in which he knows he belongs; the pub in which he belongs. The sense of belonging is what has kept the English/British/whatever pub on its feet since the Vikings organised drinking games and the Normans brought in wine. And cider we are meant to believe.

Ah cider the fruit of the apple, the drink that causes dropsy, the farmer and farrier’s tipple, the drop of golden sun that Julie Andrews never had in mind when she sang a song in defiance of the storm-troopers of the Reich, all of them dour, mean men with a penchant for punishment. And if we drink too much of the farmer’s tipple then we are perhaps guilty of a much lesser crime, the punishment of the pancreas and the end of our days as a sane and rational man or woman.

But in the pub the people are coming and going, hello Jack, hello Jim, hello all, evening all, swaying on heels at the bar, the wooden cage of the bar, surveying all around with the jerky neck movements of CCTV, CCTV TV, robotic balletic movements that are suddenly soothed and slowed by the glass of beer sifted through the invisible spirits that patrol the space between the start of the act and the act carried out, the culmination that will end in a flood of beer across the tongue, the Goths riding across the eastern plains again. I like this pub, I like that pub, I like the pub, I like all pubs but I like some better than others. The end. Goodnight ladies, goodnight.
Posted by Adrian Tierney-Jones at 11:18

Email ThisBlogThis!Share to TwitterShare to FacebookShare to Pinterest
Labels: pubs