In search of lost time 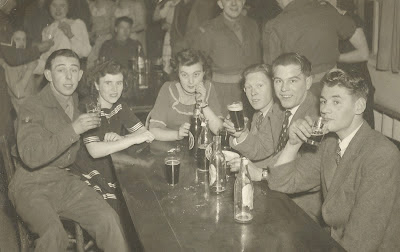 Men and women in a pub together, sometime during the early 1950s or at the end of the 1940s, and the beer is as dark as it always was then. It’s Yorkshire brewed, Hepworth I think, given the use of a magnifying glass to see the start of the name of the label. Why do I know this? The bloke on the left, in the uniform of the Royal Engineers, is my father and he did his square bashing in Catterick (first in last out he still says today with pride of the RE, though I always ask if he means going to the Sappers’ Arms or some similar institution). I look at the beer in their glasses, I presume it’s mild, it’s dark after all and this is the time when mild was the go-to drink. Interesting enough the bottle is clear, was this something to do with the rationing of glass? I have asked him what the beer tasted like and he can’t remember but then he was never a big beer man (Mackeson, or Mackie as his mother used to call it, with Sunday roast beef and Yorkshire pudding, and that was it). I like this photograph, it shows an unconscious element of beer drinking that was just part of the life of Britain at the time. My dad went on to enjoy Scotch and the odd glass of wine, but it was when I started writing about beer that he began asking about beer again. I remember his interest in O’Hanlon’s Port Stout and his recoil from a glass of Goose Island IPA. This historical, Proustian search for lost time comes as I start on a feature that will include the NFT’s magnificent Roll out the Barrel dvd and makes me think that we all must have personal family pictures with beer to the fore — I’m now looking for one with my mother nursing a glass of Bass No 1 Barley Wine, which she does recall enjoying in the 1950s.
Posted by Adrian Tierney-Jones at 09:00