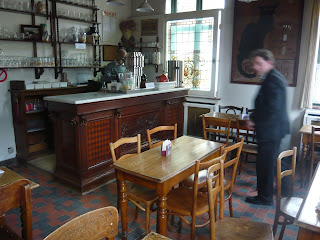 It’s that moment that never leaves you; it’s the memory that itches, that demands to be scratched; the memory that you also use as a security blanket, a warm comfort against whatever assails your day-to-day life. It’s memory as a motivator: George S Patton with a speech that emboldened his guys to go up north after Normandy. It’s the memory as a firecracker sparking off a spitting, hissing, fizzing firework display of light, fire and noise within the cranium; it’s Marcel Proust dipping his biscuit into a cup of Rosie Lee and being brought back to his childhood.

For me, tonight, today, tomorrow, memory is the cold clear day, the crispness of the air, the big sky, and then the glass of Orval in the pub, but also the sight of Westmalle Dubbel in the fridge at the back of the bar, all of it taking me to one destination: Bruges. Which is where I was two years ago this week, researching the bars for an article for the Sunday TimesTravel Magazine (paywall I am afraid).

There is one bar, amongst the many I visited, that plays with me, that remains with me; not because it had great food (Cambrinus); not because it had a delightful crepuscular sense of seclusion (’t Poatersgat); and not because you have to go there when visiting Bruges (’t BrugesBeertje). This bar somehow takes me back to an imagined past, a mythical (in a personal sense) past, a past that I feel I might have briefly experienced back in the 1980s, but perhaps I didn’t.

It’s the Black Cat, a small corner bar at the folklore museum close to the Jerusalem church, one of Bruges’ hidden treasures. When I visited there were six beers, both bottle and draft, and I chose what was called Trappist Steenbrugge, a dubbel that was rich, dark and chocolaty. Even though it was part of the museum I felt I was drinking in a bar that would have been part of old Bruges as the large clock ticked away, reminding myself of mortality and time’s fleeting passage. The bar displayed bits and bobs of Bruges’ past, had wooden tables and chairs and a 100-year-old music box that worked if you put half a Euro into it; there was even a colourful vision of Gambrinus on a barrel raising a toast. A couple of men sat quietly in the corner as if meditating on their beer. Something about the bar (and the museum) gave me a false memory of the past, the feeling that I used to visit bars like this in the past (whereas in reality I was in school) — it’s a museum bar for Christ’s sake and yet it’s playing havoc with my memory.

The clock ticks, voices hum, the glass of beer on the lips revives and once again a bar takes me somewhere else in time, to somewhere I might or might have not been. As Yukio Mishima wrote at the end of his amazing tetralogy The Sea of Fertility, ‘memory is like a phantom mirror. It sometimes shows things too distant to be seen, and sometimes it shows them as if they were here’. For me that is the great, magical, enchanting strength of a bar or pub — it can sometimes make time fade into the shadows and let reality becomes a confusion of memory. And all with a glass of beer to hand.