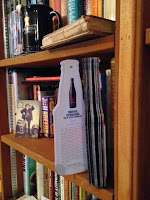 World Bottled Beers. I’ve never done a book like this before, a book shaped like a bottle, slipped into the pocket easily, but shaped like a bottle. But then I’m a writer in love with words so for me the words are what matter with this book that’s shaped like a bottle. There are 50 beers in this bottle-shaped book, beers from around the world, beers that have shaped the way I view and drink beer and beers that I have always loved. It’s not an easy book to write because I find it hard to pick 50 beers and there’s another 50 beers waiting in the wings and then another, but then I tell a lie, a beer book is always an easy book to write because you keep telling yourself that you’re being paid for writing about something that often comes upon one like a divine wind, reeled in like a fish on a hook. This is a book of words and images, a list if you like, oh yes it’s a list (so look away now), a book, bottle-shaped let us not forget, that features such stars as Magic Rock, Camden, Kernel, Birrificio Italiano, Stone & Wood, Lost Abbey, Stone, Grado Plato and of course the beer before which I lose all reason Orval. This year has been a book writing fest (or test) with a Revolution, a bottle-shaped hole in my soul, 50 contributions to 1001 Restaurants, and in the next couple of days the final filing for the history of the International Brewing Awards — yep, writing about beer, food, travel and how they all combine for a pre-match huddle can be such fun. Sometimes.
The bottle-shaped book seems to have a life of its own, it feels a bit like where’s Wally sometimes, as it flits around my bookshelves.
Posted by Adrian Tierney-Jones at 09:00