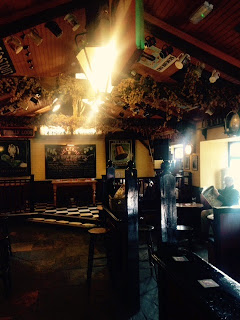 What was it that stirred within me? What was the feeling that was brought to the forefront of my mind, a memory, an indication, a window sill on which I felt a brighter, sunnier time, a less stressful (or was that the filter that the brain always installs?) time, a time when my world was young, a place where it didn’t matter what went into my glass as long as it refreshed and occasionally stimulated a night out with friends. The past.

I was in the large barn-like expanse of the Fat Cat Brewery Tap, early doors, 11.30am, Saturday morning, a space that was already occupied by a brace of drinkers, their newspapers flattened in front of them, like maps, a guide to the internal landscape of their views, interests, prejudices and what they favour when it comes to switching on the TV. From the outside it looked unpromising, a youth centre from the 1960s, a slice of red brick, a short slope of roof on one side, a longer one on the other, utilitarian, an upside-down V shape with one side longer than the other.

Once inside, though, I was brought face to face with a collection of inn signs and tin plate brewery signs — Lacon’s Yarmouth Stout and Dinner Ale; Kops Stout; The Fusilier. On a chalkboard above the bar, which ran along the side of the room and behind which was the brewery, there were beers to be served from cask (both hand pump and by gravity), keg and bottle. There was cider and for those who eat there were pork pies, but it wasn’t the food that I was interested in that morning. 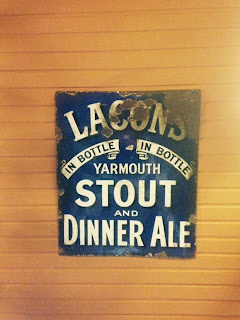 I wandered about the room, neck craning, looking at the signs, recognising something within me that was young, not child-like, but something going back to the 1980s perhaps, when I lived in Cambridge, Paris and London (not at the same time). I cannot articulate this feeling, cannot articulate the reason why I felt the way I did, it was like when you dream and then wake up and know that you’re dreamt but whatever it was that you dreamt about is over the horizon of known vision. If you could only concentrate enough you might know what it was you dreamt about but it is tantalisingly out of range, out of sight, out of the mainframe of everyday life.

So on that Saturday lunchtime, I tried to understand, to work out, to articulate why it was the way I felt like this, and through the prism of a couple of glasses of Fat Cat Marmalade and Beavertown’s Bloody ’Ell, I continued to consider memory and beer and pubs and inn signs and how the end of all our exploring will be to arrive at the beginning and start all over again.