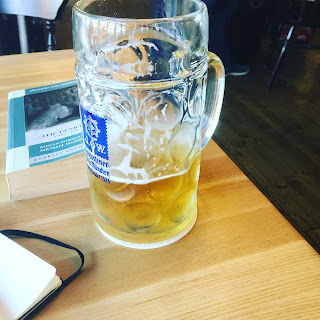 It is now nearly two years since I was last in Germany and nearly two years since I had a large glass of the pristine Augustiner Helles in front of me, a beer whose pale golden sheen suggests a sprightly nature, a fine-minded creature that glistens in the glass like a drop of golden sun; a fawn, perhaps, in a sun-dappled glade in a forest, scattered bursts and trills of birdsong the soundtrack. I love the lightly toasted grain on the nose, the spritzy hint of bitter lemon on the palate and the appetising dry finish that also harbours a rerun of the saintly and dainty lemon note. For me this is a quenching, refreshing and satisfying bittersweet beer best drunk in a one-litre Maß, which is how I last had it nearly two years ago at that wooden cabin-like bar that Augustiner Brewery has at the entrance to Berlin’s Schönefeld airport, a weird juxtaposition of Alpine/Bavarian rusticity standing in contrast to the slickness of Schönefeld’s bland airport chic. I always try and have a final beer here if I have the time and even though it is not Bavaria it feels just right to drink this wonderful beer as a farewell to a country I know I will want to keep going back to. Sure, if anything from Schönramer were on offer it would be an almighty tussle what to drink and I would probably drink beers from both of them and hope that I had an aisle seat on the plane (mind you, when in Berlin you go to Foersters Feine Biere to drink Eric Toft’s beers), but for me there is an iconic and symbolic nature to my final beer on German soil — this is a beer that I have drunk both in bars in Munich and Berlin, but also from the bottle, bought from a corner shop and swigged as I join other pedestrians in their street drinking or on a railway platform waiting for a train to Regensburg from Nuremberg in 2015. It is an everyday beer, an easy-going crooner of a beer, undemanding but always demanding of my attention such is the completeness of its aromatic and flavour profile. I know I can probably find bottles of it in the UK, even now, but I shall wait until I am next in Germany, whether Berlin, Munich, Bamberg or somewhere entirely new and then shall drink deeply of it, Maß glass in hand.