Beers Of The World finito: the end of beerwriting as we know it? 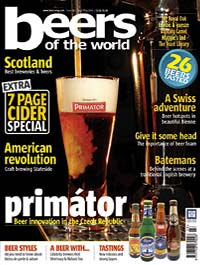 One of the magazines I write (wrote) for — Beers of the World — has ceased publication. It follows other Brit beer mags that went AWOL — The Taste (or in its latter issues it should have been The Lack Of Taste) immediately springs to mind, but I am sure there were others. It’s obvious, that unless you have a captive readership, ie CAMRA’s Beer, magazines devoted to beer in this country have no future. It’s ironic given that the British Guild of Beerwriters celebrates its 21st birthday next week, which makes me think that maybe this is the end of beer-writing as we have known it since the 1970s. We are all beer bloggers now.
Posted by Adrian Tierney-Jones at 14:26

Email ThisBlogThis!Share to TwitterShare to FacebookShare to Pinterest
Labels: beer blogging, Beers of the world