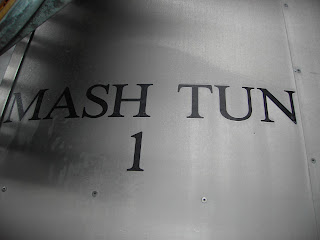 Dark chestnut brown in colour; espresso coloured head that slowly dissipates. On the nose chocolate, ground coffee plus a hint of resiny hop — a restrained sweetness; almost like a flavoured coffee; there’s the sternness of the coffee bean but a friendlier more fragrant note coming through as well, which I suspect is the influence of the hop. On the palate it’s creamy, mouth-filling, smooth and soothing, mocha coffee-sweetness but also an aromatic vanilla hint, that fragrance again, imagine an imperial version of this — a very luscious beer for its strength, which would be lovely with or in ice cream. I suspect the original 80/- was thinner than this, and with perhaps more roasted notes. Is it in style? I don’t know and I don’t really care.
Posted by Adrian Tierney-Jones at 22:13