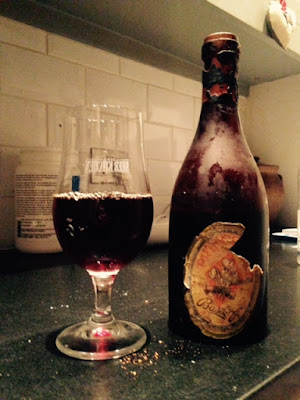 I feel the hand of history on my shoulder as I take the cork out of the bottle, an elongated, battered-looking cork upon whose side are stamped the words ‘Prince of Wales Ale, 1929, Bass’. As I dig into the cork with a corkscrew, I expect it to crumble like the bones of a long-dead saint upon being exposed to air, but it holds firm as I slowly twirl the spiral of metal into this ancient cork that has lasted a whole lifetime.

Last year, on an online local selling site, I bought a couple of cases of Whitbread’s 1977 Jubilee Ale for a fiver; it was still drinkable, if very low in its alcohol. Once home, hidden away in the box I saw what I thought was an old bottle of wine, some memento of a European jaunt perhaps, a souvenir that had never been drunk. However, the faded label with the written name of Bass gave the story away — a pint bottle of Bass Prince’s Ale, especially brewed in 1929 for the then Prince of Wales, who later on became — briefly — Edward VIII.

The oldest beer I have tasted is the 1869 Radcliffe Ale, brewed in Burton, bottles of which were discovered and opened in 2006. All I can remember is writing down sherry and smoky bacon. There has been plenty of Thomas Hardy (there is a case of 1998 slumbering in the cellar waiting for my son’s 18th in 2016), last year a Bateman’s barley wine from the 1970s, Thornbridge Alliance (one left) and several Bass royal specials, including the 1902 Kings Ale. What I like about tasting vintage beer is the empathy I feel with these long gone brewers, rather than just the taste, the link with the past; it’s metaphysical and also quizzical in that I ask myself what the drinker of the past tasted when they popped the cork and poured? Is it a case of changing palates, a different approach to tasting, a different approach to beer?

So the beer in the glass was the deep crimson colour of aged Madeira, while on its nose I caught wafts of Bovril, blue cheese (Stilton rather than Danish Blue), solvent hints, a pungent cheesy nose that wanted to be sherry, though sherry was much more evident when I took a sip. As was beef stock, some sweetness, though the more I drank the more I thought that here was a beer attenuated out of existence. It was like a woody sherry minus the sweetness; there was also stewed apple, some cinnamon, a sour-sweet character and a very dry, almost woody, finish. I don’t think there was much alcohol left in it, but this was a beer to be drunk for the simple reason that it still existed. It was a beer that was brewed in the year of the New York Crash, and then hidden away while the Battle of Britain was fought, the atomic bomb exploded, the Beatles and the Rolling Stones sang, and the world kept on turning.
Posted by Adrian Tierney-Jones at 08:30