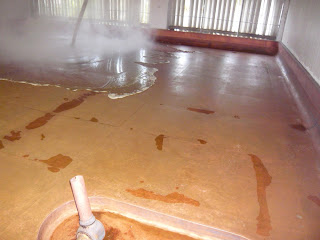 Thoughts on brewing: in which a beer is brewed and hewed into the world, leavened and heaved followed by a sense of me-too as other beers join in and to-and-fro their way into the glass, as careful as an aunt, as fretful as an aunt, as artful as the kindest thief.

Brewing is the beginning of the end: hops that were picked at harvest are changed and juddered into a different state of being in the dry heat of kiln; dead; packed together, forced, turned out into the world; the end of the journey that barley took from the field, cut down in its prime, crushed and eviscerated, its insides transformed, the death of John Barleycorn; the vanquishing of water, in thrall to a process that expels it into the air (only to start the journey all again). And, of course, the yeast, microscopic beasts, tumbling and turning over before coming to rest in the cool limpid liquid that will eventually end up as beer. Maybe, after second thoughts, brewing is just a means to an end, an end that is always beginning.
Posted by Adrian Tierney-Jones at 08:30