So it’s like the early part of 2014, the first week of March to be exact, and on a sunny Saturday morning I’ve just boarded the 6.59am train from Rimini that goes all the way to Rome and gets in at half ten, and I’ve never been to Rome before but I’m only there for 36 hours, the first of three cities I’m going to visit by train over the next six days, on assignment for a travel article, so it’s Rome first, then Florence, and I’ve never forgotten the time back in 1990, when I drove from London to Tuscany via Paris with a then girlfriend and when we got to Tuscany I kept seeing signs for Firenze and wondering where it was, and I’m going to finish off in Venice where naturally I’m going to be thinking Don’t Look Now and funeral boats gliding along the canals, though back in Rome, I have a job to do and that’s about wandering through the famous places with my notebook and jotting down impressions, people’s behaviour, overheard conversations (English of course, my language skills diminish by the day) and which restaurants and bars can be recommended, but by the early evening, I have a full notebook and it’s time to relax and I go to a bar, which is an easy choice for me because I have wanted to go there for several years.

So six years ago, Italian craft beer was cool stuff, was becoming established, and Ma Che Siete Venuti A Fà in the Trastevere district was seen as one of the coolest bars in the country, which was where I went twice during my very short stay in Rome, first time on the Saturday evening where I felt it had the feel of compact log cabin, a couple of rooms, wooden floor, chalk board with names of beers, lots of Lambrata, whose beers I have always enjoyed since visiting the brewery in 2008, and there was a real sense of a pub about the place, which was a contrast to the chrome and minimalist craft joints that were springing up all over the UK (well ok London, Leeds, Manchester etc), people greeting each other and I sat at the bar watching Ireland play Scotland in the Six Nations, while the music of Nick Drake played in the background and a couple of Brits talked about sour beers close to me.

Next morning, Sunday, I went back, after visiting the Vatican Square where people were gathering for something or other, and it was the first day of the bar’s famous Franconian beer festival, which if I hadn’t have to get a train to Florence, would have been my home for a few hours, but I still managed to spend 90 minutes reconnecting with the previous night’s pub atmosphere, in the company of several beers including Schlenkerla’s dark chestnut coloured Fasten Bier, which had a quiet and reflective smokiness on the nose that somehow made me think of a wooden box that had once held smoked herrings ready to be shipped out of an old Hanseatic port, while the palate had an appetising smokiness and a malt stickiness, all of which were as well integrated as the parts in my Apple laptop, but were much more exciting, and as I drunk deeply of this beer I knew that if I didn’t leave soon I would miss my train and there was this slight tremor of rebellion about throwing everything up in the air and just changing my life, but that moment passed and a couple of hours later I was in a five-star hotel in Firenze/Florence/whatever ready for the next stage of my journey.

Have you ever found a pub or bar so sublime that you have considered throwing up in the air all your best laid plans and thought I’m staying? I have several times but that’s a different story. 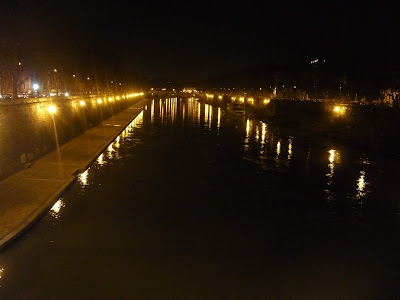