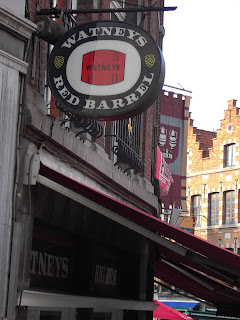 Is Watney’s Red Barrel still available and if so could it spark off the same retro-beer movement that over in the US has drinkers, the sort you would normally expect to linger over their craft beers, ordering the corn-fed Pabst Blue Ribbon as a sort of act of rebellion or defiance against the accepted order of things?
Posted by Adrian Tierney-Jones at 22:09