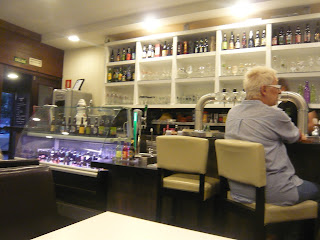 Craft beer café it says and in the middle of the old town of Malaga here is Cervecería Arte&Sana. Here for a couple of days on a travel feature and was pleased to find this place recommended to me. Unlike other ‘craft beer bars’ I’ve found in the unlikeliest places recently (Rimini, Bologna) this is actually easy to discover as it is on a busy Plaza in old Malaga (cheaper rents than in Italy perhaps?). I don’t expect much from these sorts of places: good beer, expertly poured and a decent ambience. Oh and some food if you want.

So there I am on a Friday evening in Malaga, in a very modern bar, with a black and white theme in the tables and chairs, but a stainless steel serving thing and a wall with a cupboard filled with loads of — dare I say it — craft beers from across the world (lots of Mikkeller). I like the place — in a funny sort of way it reminded me of Moeder Lambic (the second one), with its light and airy ambience, a none too precious attitude to beer with also a great beer list, of the sort you wouldn’t expect to find in Madrid never mind in the south of Spain.

There was a blackboard at the end of the bar with the draft beers’ names up there — I’ve come all this way and there is Thornbridge and BrewDog, but there’s also some Danish beer plus the best example of a Spanish c-word beer I have had for a long time. Dougall’s 942 Pale Ale is a fragrant (as in peach and orange ripe skins frotting each other until the cows come home) beauty of a beer with a weighty mouth feel and a dancing almost Sufi-like whirl of refreshment through the whole of the gulp. Thornbridge’s St Petersburg is a blast.

And as I watch a drunk American woman trying to keep it to together through her glass of Dead Pony Club, while lads with beards order Green Flash barley wine alongside Paulaner Weiss, I am struck by this thought: are craft beer bars the Irish bars of the future (a thought occasioned by the sight of a nearby Irish bar — Morrissey’s, for a moment I thought it was perhaps an ironic English bar celebrating Manchester misery) and mightn’t it not be a good thing?
Posted by Adrian Tierney-Jones at 13:14

Email ThisBlogThis!Share to TwitterShare to FacebookShare to Pinterest
Labels: Spain, the c-word, travel