In a beer garden in Berlin 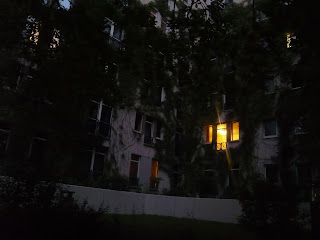 It is a summer evening, both august and August, the sort of carefree evening when a beer garden is a garden of Eden for students, office workers on their way home, local beer hounds and beercentric tourists like myself. The tables are all crammed, and the machine gun stutter of laughter and quick bursts of urgent conversation flit tracer-like through the air. The waitress weaves through the tables, a notebook the evidence of her trade, dark haired, irredeemably gothic, her head shaved on one side, long on the other, schizophrenic in the vision it provides to the world.

On the beer card there is Pilsner, Dunkel (brewed the old Berlin way apparently) and — intriguingly — a saison. However, the Dunkel is what I want to try but it’s not on and I’m told that the Schwarzbier is available instead. As a couple on the next table croon Waltzing Matilda softly for some unfathomable reason I order a half litre. I am glad I order the Schwarzbier — It is creamy and roasty, smooth but also prickly in the way it lays itself down. Tremulously soothing, a brush of milk chocolate, a heft and weight in its body, a robust elegance, a calming, hand on forehead, stroking of the hair, stroking of forehead kind of beer and then I note that the couple on the next table have gone silent. They too have just received the Schwarzbier.
Posted by Adrian Tierney-Jones at 16:11