Hand it to Falmouth 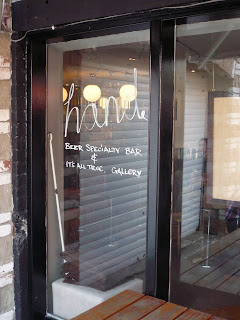 Small bar, darkish, in the brewery yard (right location then), in the corner, off the sunny road that flies through the sunny site of Falmouth — I’m doing a beer tasting. A couple of moths ago I was asked if I would like to do a tasting of Otley’s beers at the Hand Bar in Falmouth, a place the mighty titan (or should that be Titian?) of brewing Stuart Howe had told me about. He had been there some time before and so I felt I had a hard road to follow.
I like Falmouth. I like Falmouth, love its maritime museum as well as the feel of its high street that hasn’t been colonised by the sort of shops that the majority of people seem to love (but then that’s their choice — if you like Tesco then you like Tesco and Tesco likes you, why worry about it). Old shops, sweet shops, chips shops, clothes shops, the sort of shops that folk in Bristol apparently take to the street to defend (though whether they’re defending shops or something else is up to debate). I like Falmouth.
There’s a great relic of a pub out there. The Seven Stars is a study in pubs, an Austro Hungarian survivor of a pub that I immediately fell in love with. It’s decrepit; so what does that mean? The Bass comes from the barrel and is magnificent; other beers come from the barrel, from Sharps and Skinners. The interior peels. The bloke to my left burps as I take a pic. Don’t worry about it I say I’m not recording, said with that sort of jocular ‘hey I’m just like you’ middle class voice. I don’t care comes back. There are always moments like this when I feel like a tourist. But then I don’t care either. I love pubs and a windy guy isn’t going to get in my way. The Seven Stars is cracking in the sense that it’s visibly falling to bits but also perhaps one of the most authentically earthy pubs I have ever been to. People on benches outside cackle as I take a photo... 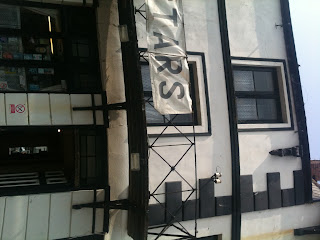 Then onto Hand, magnificent in its compact space in an old brewery yard (W & EC Carne, set up in the second half of the 19th century, where wine, corn and rope would be jostling for space with barrels of beer; if that wasn’t enough they were also shipbrokers; in 1921, JA Devenish swallowed them up). It is reminiscent of the Rake except at the moment there is no cask beer as such, but a platoon of taps plus a battalion of bottles — Brooklyn Lager et al(e) — this is a different space for the beer fans out here who fight fights about the merits of Proper Job vs Cornish Knocker vs Doom Bar. I love this place, it’s new, it’s got the feel of something different. The tasting seemed to go well, people have their likes and dislikes which is what I encourage in a tasting — there’s nothing worse than nodding one’s head like a mechanical donkey. I like the dialogue of beer tasting. The O8 was Riesling with hops while — polishes badge of merit with pride — the Sasion Obscura went down a storm. So If you’re off to Cornwall this summer then Falmouth is a great beery destination as not only is there Hand, there is the Seven Stars (the most decrepit pub in existence, which is a plus) and Front with its excellent selection of ciders and beer. Falmouth: forego the surfing at Newquay and force yourself to Falmouth. You will not be disappointed.


Oh and if you want to read my review of Batham’s Vine in today’s DT it’s here.
Posted by Adrian Tierney-Jones at 10:32