A nice dinner with Carlsberg 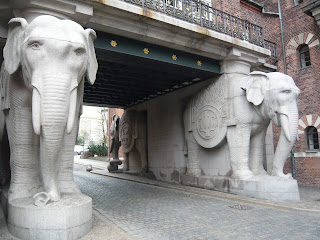 I received an invitation to visit Carlsberg in Copenhagen, where JC Jacobsen kicked off brewing in the 1850s. A global brewer, a painless Pilsner, ubiquitous branding, but hell so what — this is one of the great brewing enterprises of the world, a space that is filled with all manner of architectural flourishes. I particularly wanted to see the massive stone elephants that stand at the gates, carrying the weight of an old part of the brewery on their backs, a nod to the ancient Hindu belief that the earth was supported on the backs of a group of taciturn pachyderms. Then there was the microbrewery that Carlsberg had installed (whose beers I had enjoyed when they made a brief appearance in the UK), which is why on Monday evening I was thrilled to be drinking Jacobsen Saaz Blonde with a starter of smoked wild salmon.
‘We are here to have a nice dinner and a cheerful evening,’ said a round-faced, rubicund man in chef’s whites. He was the head of the cooks’ corps that produced the night’s beer dinner, held in the Greek temple-like surroundings of Ny Carlsberg Glyptotek, an art museum founded by Carl Jacobsen, the son of JE. To say that Carl was a bit of an art collector is like saying that Captain Kidd dabbled in a spot of piracy. In a long gallery prior to eating we were shown galleries stuffed with marble sculptures from the French impressionists including Medusa having her head sliced off and a particularly effective one of Adam and Eve after the fall (even as an atheist I could admire the despair and misery that the artist had captured on the face of Eve, the true meaning of expulsion). 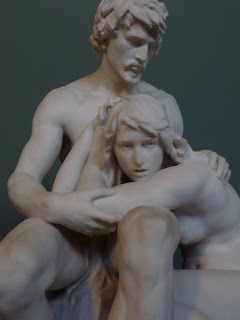 Gallery after gallery demonstrated that the Jacobsens practised patronage of the arts on a par with the Medicis (but in a much more benevolent way, no one was killed or made Pope as far as I can make out) — for instance, a hall featuring Roman copies of Greek statues brought to mind a hall of heroes (not the originals but still pretty old), a sort of classical Valhalla; meanwhile stone fragments from the graves of long dead people reminded me of a passage in Tom Holland’s Rubicon, where he wrote of lonely tombs on the road to Rome  having a bittersweet smell of herbs, spices and decay about them.
In the foyer, where we were served Carlsberg’s sweetish, soft Pilsner, simple but unifying in its refreshing capability, tropical flora reached up to the sky and all that was missing was parrots and monkeys. Dinner was served in a Greek temple with Jacobsen Saaz Blonde alongside the aforementioned salad of smoked wild salmon, the beer’s ringing, singing Gewürztraminer notes lifting the flavours of the salmon and the smoked cream cheese; it’s a bright, cheerful beer, sunny and friendly. It was a pretty brilliant beer and food match.
Carlsberg’s speciality beer chap Bjarke Bundgaard was on our table and as pleased with the match as we were. For the next course, salted rooster (as the chef said) and Jacobsen Forasbryg to match. A spring beer. Wasn’t so hot about this one, though on its own it worked. The beer was sweeter and seasoned with woodruff, which seemed to bring the character of coconut oil to the aroma and on the palate; a bit blowsy maybe. I wondered if it needed the heft of more alcohol to do battle with the food (it was 6.3%, while the Saaz was 7.1%). Chocolate pudding followed but several of us were on our way to the Mikkeller bar by then (and what a great space that is, more of that later this week).
But let us return to the dinner. Whatever the beer, location location location would have won out on this: we ate and drank in a classical space with columns, arches and statues, all moments that brought the classical age to life. Meanwhile Carlsberg showed that they got what was going on in craft beer (and the next day brought tastings of the Dark Lager, Pale Ale and the captivating Extra Pilsner).
It is easy to criticise Carlsberg. They are a big target. There’s a big ad campaign out there in the world (which is why about 80+ journalists were present). The tagline is ‘That deserves a Carlsberg’ and was unveiled along with associated flim-flam (thundering rock music, ad slots for the telly and cinema and speeches from assorted execs that included the phrases ‘iconization’ and ‘global and local approach’). Sure it’s about beer sold like Coca-Cola, but then that’s par for the course with global brewers, that’s the way they operate. On the other hand their Premium beer is 100% malt, a new strain they’ve developed, and no corn or rice is added (a Croatian journalist was very keen on getting this made clear). Or maize even as one senior executive coyly said (referring obliquely to one of their competitors’ beers). It’s also a beer that fits a certain situation, after squash, a run, five-a-side. It’s not something I drink much and while I adored Mikkeller and its bar (Vesterbro Pilsner was gorgeous and got me in a spin while Black Hole was immensity itself, rich, luxurious, lushness), but I’m also impressed with Carlsberg for their Jacobsen range. They don’t have to do it, but they do. Credit where credit is due and it’s a shame we don’t see it over here anymore.
‘We are here to have a nice dinner and a cheerful evening,’ said the round-faced, rubicund man in chef’s whites. And we did.
Posted by Adrian Tierney-Jones at 08:20