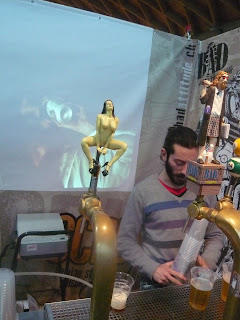 I find this one of the most tackiest tap tops that I’ve ever seen. Can’t remember the name of the brewery, but this was at the expo in Rimini after we’d judging at Birra del’anno earlier in the year. Without wanting to sound too righteous, I mentioned it to the guys at the brewery, but they just smiled and sort of shrugged — looking at their other taps, Jesus in a kilt, big words such as BAD in view, I can only assume that they were taking BrewDog as their influence. They got that one wrong. BrewDog can be accused of many things, but misogyny is not one of them.

So what do I dislike about it? It’s tacky, tries hard for 50s-style Betty Page sub-porn but comes across as just a bunch of young lads sniggering after they’ve written cunt and piss on the wall. I also don’t like the way it suggests that this cartoon woman is enjoying being skewed on a pole. God knows there’s enough negative images of women being used to sell beer, but this takes the whole of the biscuit barrel and chucks in some fig rolls as well — Top Totty seems like a Spare Rib cover compared to this.
Posted by Adrian Tierney-Jones at 15:12