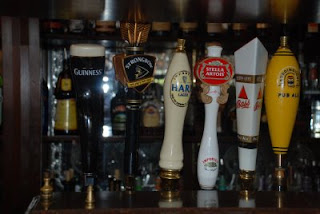 This there here is a picture of the bar at the ‘English pub’ in Disneyland, Florida, where my wife was recently on a press trip (you can read about it here) — if you lived in the bubble that seems to be Disney then these hideous looking artefacts are presumably seen as the height of drinking style over here. It’s like a vision of an alternative history of UK pub life, a steampunk version of what would have happened if craft brewers in the UK (and in the US) hadn’t decided that they wanted a bit of variety in their drinking lives — and, of course, we drinkers also decided to give them a chance. Given Disney’s concern with wholesomeness (one of my wife’s fellow trippers wanted the name of her blog — Dulwich Divorcee — on a Disney t-shirt and was told that Disney didn’t like to be associated with such a word as divorce), then does it know it is selling wife-beater? When you come to think of it, it is slightly sinister to think of a mouse in trousers and a duck wearing a hat. It’s Dr Moreau gone mad.
Posted by Adrian Tierney-Jones at 22:40