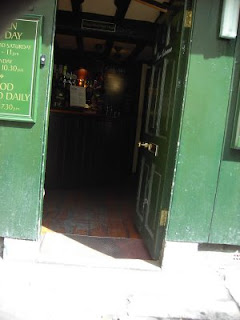 To the Oxford Brookes Library for a meeting of the British Guild of Beer Writers committee; the Library has a special brewing (and gastronomic) section. Michael Jackson’s archives are stored there (as it seems are those of one of my favourite food writers Jane Grigson) and they take up a lot of space. It’s informative and also poignant; I remember being awed when seated next to Michael at the 2000 Wheat Beer Awards and he said that he had never been able to successfully identify a beer during a blind tasting, I think he might have been having me on. On the other hand there are rows and rows of brewing and beer and pub books racked up there — this is a vertible brewing wonderland and I think you can view it (contact libraryenquiries@brookes.ac.uk to book an appointment). Onto Oxford pubs then — I lived in Cambridge for six years and have (and still do) always thought that Cambridge is a superior beer town: the Free Press, Cambridge Blue, Live and Let Live, I rest my case. On the other hand, I was taken to the Turf, down a little alley, overlooked by a section of the old town walls — a beer garden in which it was a Proustian pleasure of sorts to enjoy an ale or two in the afternoon (we all sat there and swapped predictably boring anecdotes of boozy days from long ago). ‘It’s fantastic having a beer when people are working,’ said one smugoid on the next table. I concur, though this is not something I do much these days (apart from Sunday), but there is something absurdly wonderful about one (or two) on a Wednesday afternoon. As for the beers, at the King’s Arms the Young’s Ordinary still had that sprightly hoppy edge that I have always loved, while at the Turf Otley became a new friend with their use of American hops (it was also good to see Cotswold Lager Company’s Wheat Beer on tap — message to brewery, get your glasses out into circulation, the beer looks horrible in a nonic pint glass) and the Bear’s ESB was a big multi-coloured glass of fruit, esters, barley and love. This trio of Oxford pubs I visited might make me re-evaluate things so I think it’s time I went back out east and contemplated Cambridge’s beer credentials as well.
Posted by Adrian Tierney-Jones at 17:53